Home › Tips › Noxious weeds to watch for in June

Noxious weeds to watch for in June

If you’ve made it outside on a recent sunny day, you’ve probably noticed the abundance of flowers blooming in gardens, parks, forests, and throughout King County right now. Unfortunately, the noxious weeds are out there, too—many of them bolting, flowering, and even going to seed already.

Below are some of the top regulated noxious weeds to keep an eye out for this month. Please let us know if you see one of these high-priority invasive plants, so we can make sure they’re controlled or eradicated in time! [Click here to go to the King County Noxious Weed List for the whole list!] Report locations and share photos with us easily on our new and improved Report a Weed online form.

First up, weeds already going to seed or getting close. Catch them now before seeds disperse! 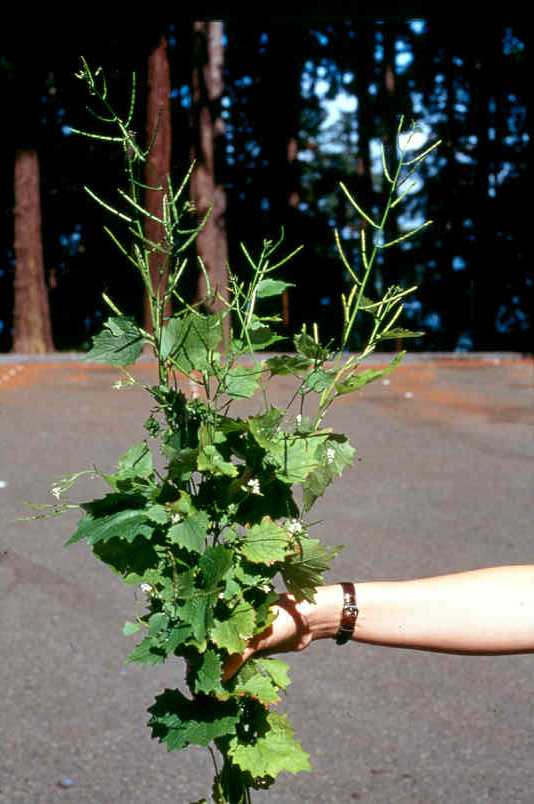 Many garlic mustard plants in King County are going to seed. Note the long, skinny seed pods on this one.

Garlic mustard (Alliaria petiolata), a Class A noxious weed, is a biennial or winter annual herb, can self-pollinate to produce 62,000 seeds and overtake a relatively undisturbed forest understory. Eradicating it before seeds mature is key. You can identify garlic mustard by: 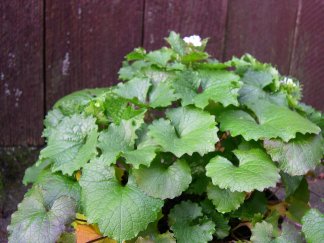 Garlic mustard rosette leaves are more rounded or kidney-shaped, while mature plants have more triangular leaves. All leaves are lobed. 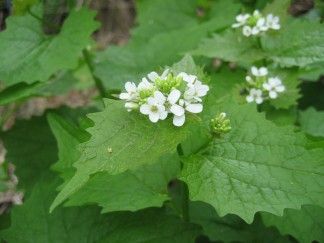 Many shiny geranium plants are forming seed capsules (the crane’s-bill-like shapes next to the flowers), though they aren’t dispersing their seeds quite yet.

Shiny geranium (Geranium lucidum), a Class B noxious weed, is an annual herb that grows in disturbed areas such as roadsides, as well as in shady woodlands and forest openings. This weed is already starting to form seed capsules, though it isn’t dispersing seeds yet. You can identify it by: 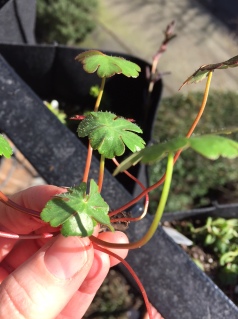 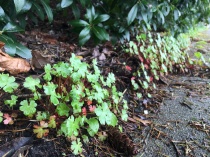 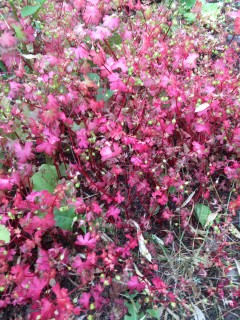 The next group of weeds are now in full flower and before long will go to seed. Make sure you eradicate them from your property before they do. 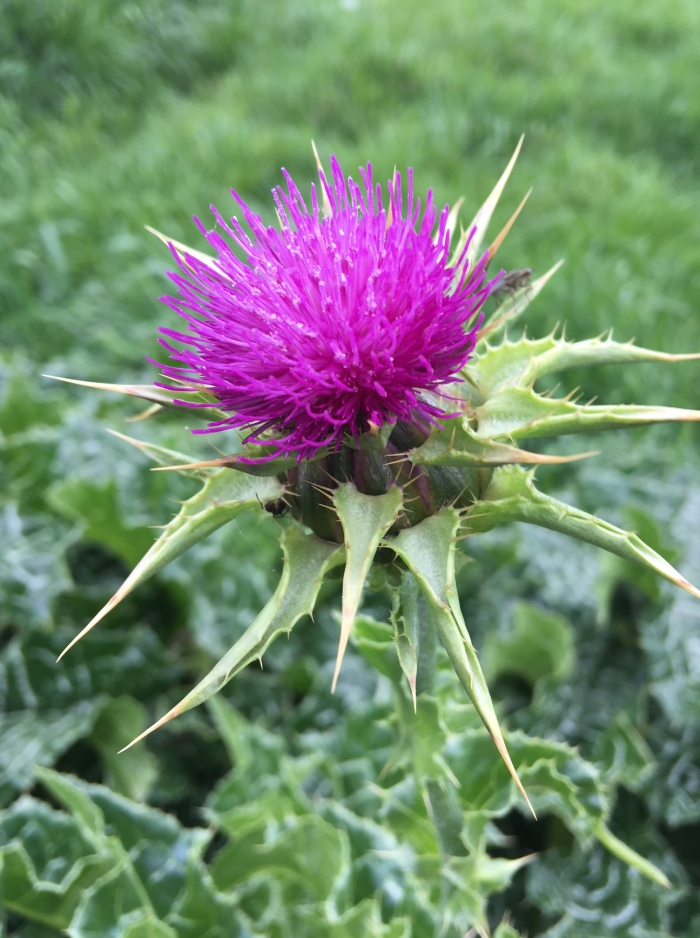 Milk thistle’s large, pink-purple flower head with broad, spiny bracts around its base is in full bloom right now. Photo by Dan Sorensen.

Milk thistle (Silybum marianum) is a Class A noxious weed that grows 2 to 6 feet tall and is a winter annual or biennial that grows mostly in rural parts of King County. You can identify it by: 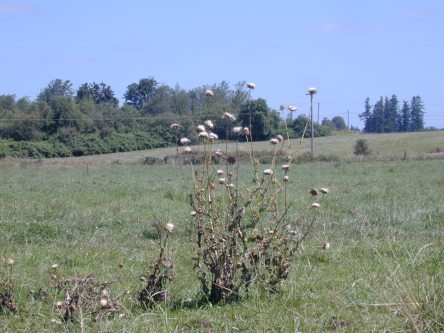 A bee enjoys an orange hawkweed flower. Be sure to time your noxious weed control so that it has the least impact on pollinators and other animals that might be using the plant.

Orange hawkweed (Hieracium aurantiacum) and yellow hawkweed (Hieracium caespitosum) are two Class B perennial herbs that readily invade roadsides, pastures, grasslands, and other areas throughout King County. Both weeds spread via seeds and stolons. You can identify them by: 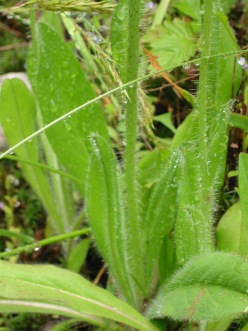 – Hairy, unlobed leaves in rosette at base of hairy, almost leafless stems.

Dalmatian toadflax grows especially well in disturbed areas with rocky soil, such as around train tracks. Photo by Sasha Shaw.

Dalmatian toadflax (Linaria dalmatica ssp. dalmatica), a Class B noxious weed, is a perennial plant that grows to 3 feet tall and mostly grows in disturbed areas in western Washington. It spreads by both seed and spreading roots. You can distinguish it by:

Dalmatian toadflax produces multiple stems from one woody base. 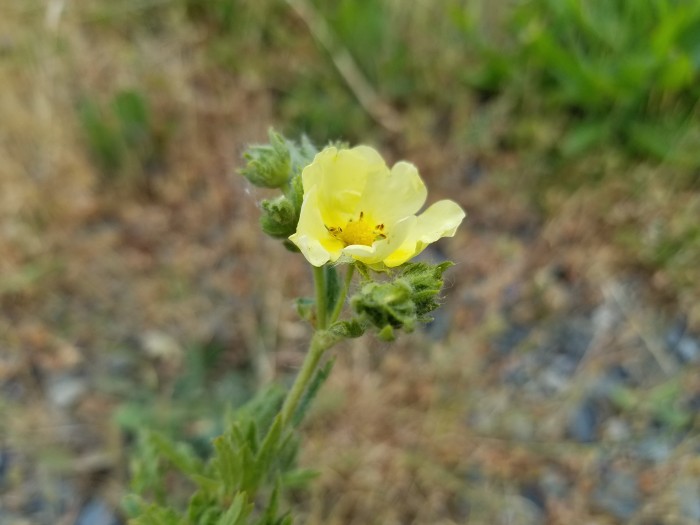 Sulfur cinquefoil (Potentilla recta) is another Class B noxious weed and perennial herb that reaches 3 feet tall. You can distinguish it by:

3. Budding or starting to flower

At a bit earlier stage in their life cycles, the following plants are either budding or just starting to bloom.

Tansy ragwort plants are bolting, and some are even starting to form flowers.

Tansy ragwort (Senecio jacobaea), a Class B noxious weed, is a biennial found throughout King County that is toxic to horses, cattle and other animals. It quickly takes over disturbed areas, thriving in sites with full sun and dry to somewhat wet soils. You can identify it by:

Tansy ragwort often spreads in pastures and fields where it out-competes grass. It is toxic to horses, cattle and other animals.

Giant hogweed (Heracleum mantegazzianum), a Class A noxious weeds, is a perennial that usually grows in urban areas, especially where there’s rich, damp soil. This plant is poisonous, and touching its sap can cause severe blisters or even scars, so it’s good to know how to recognize it. You can identify it by:

Leaf undersides are hairless, with hairs only on ribs. 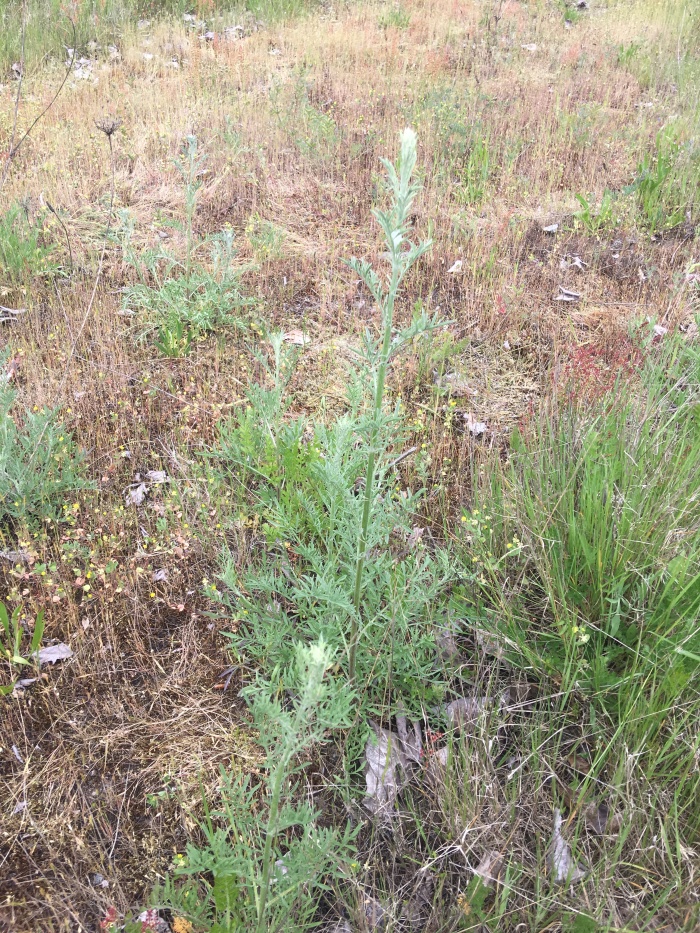 Spotted knapweed will soon be blooming. Its silver-gray hue is a good way to identify it even without flowers. Photo by Tricia MacLaren.

Spotted knapweed (Centaurea stoebe), a Class B noxious weed, is a biennial or short-lived perennial that often appears in disturbed areas, especially those with full sun and well-drained soils. You can identify it by:

Meadow knapweed is starting to bloom, revealing its oval, pink to reddish-purple flower heads. Up close, look for the comb-like fringes near bract tips around the flower head base.

Meadow knapweed (Centaurea jacea x nigra), another Class B noxious weed related to spotted knapweed, is loner-lived perennial that grows in not only disturbed sites, but also riverbanks, pastures, moist meadows, forest openings, and other areas. You can identify it by: 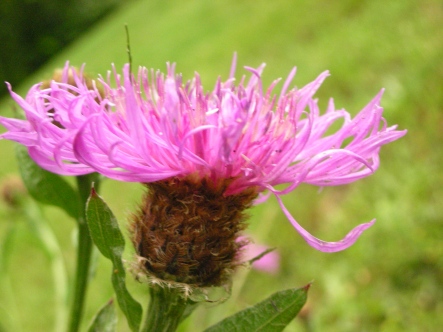 Meadow knapweed’s oval flower heads with pink to reddish-purple flowers grow singly on stems. Bracts at base of flower head have comb-like fringes near their tips. 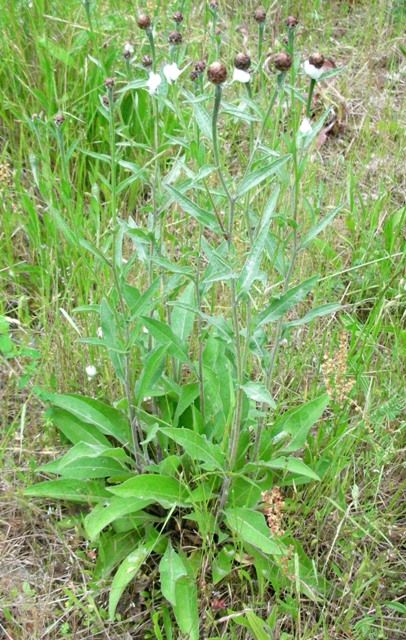 4. Plants to keep an eye on

Plants in this final group are putting their energies into growing right now. They won’t go to seed until later this summer, but keep a tab on them and make sure you’re ready to control them when the time comes. 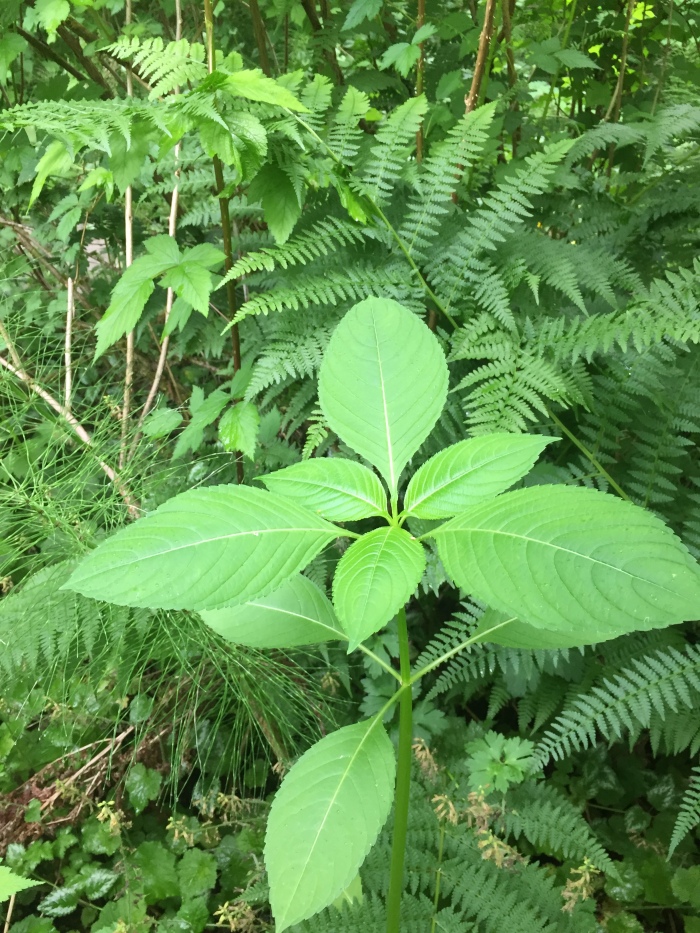 While not 8 feet tall yet, many policeman’s helmet plants are large enough to spot. Look for large, oblong or egg-shaped leaves with serrated edges, growing opposite or whorled in groups of 3 on stems.

Policeman’s helmet (Impatiens glandulifera), Class B noxious weed, is a 3 to 8-foot-tall annual that grows especially well in moist areas, such as wetlands, streams, and damp woodlands. You can identify it by:

Policeman’s helmet has large, oblong or egg-shaped leaves with serrated edges, opposite or whorled in groups of 3.

Purple loosestrife is bolting right now. Look for 4-6-sided stems and simple, smooth-edged leaves appearing opposite or whorled on stems.

Purple loosestrife (Lythrum salicaria), Class B noxious weed, is a deep-rooted, rhizomatous perennial found mostly in damp areas, such as freshwater and brackish wetlands, as well as lakes and streams. It spreads through both vegetative growth and seeds. You can identify it by: 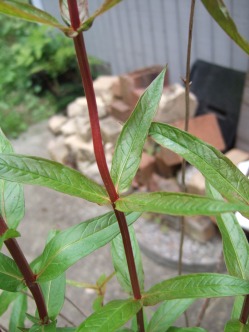 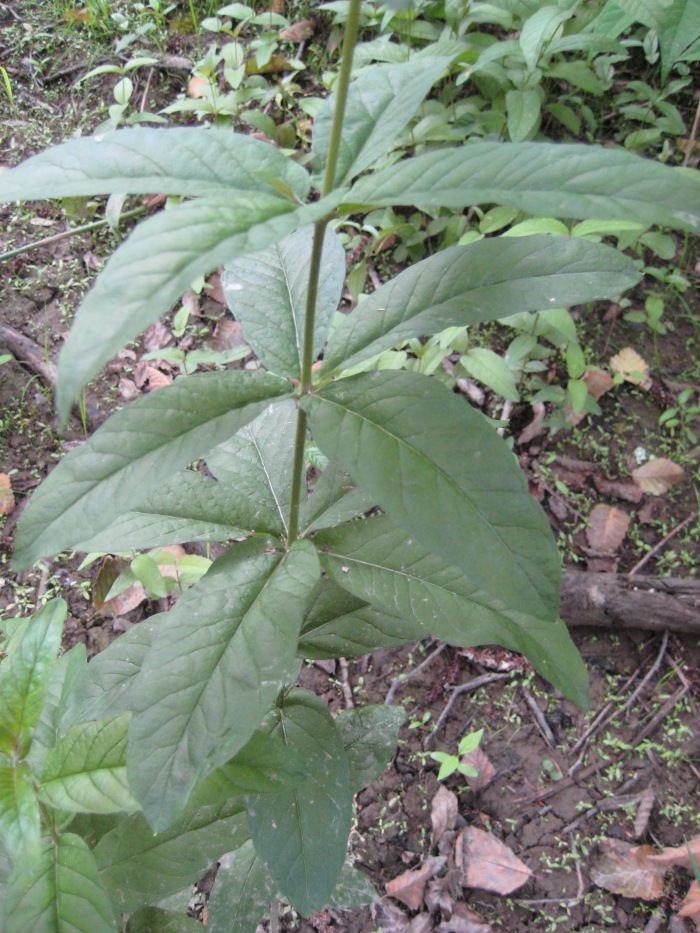 Garden loosestrife is growing tall. Look for softly hairy stems and leaves along with lance- or egg-shaped leaves usually arranged in whorls of 3.

Garden loosestrife (Lysimachia vulgaris) is another Class B noxious weed and deep-rooted perennial often found in wet areas, although it’s not related to purple loosestrife (despite the common names). Garden loosestrife spreads primarily via creeping rhizomes. You can identify it by: 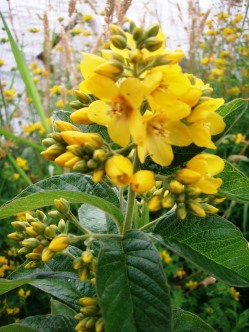 Garden loosestrife produces clusters of bright yellow flowers with 5 petals joined at the base. 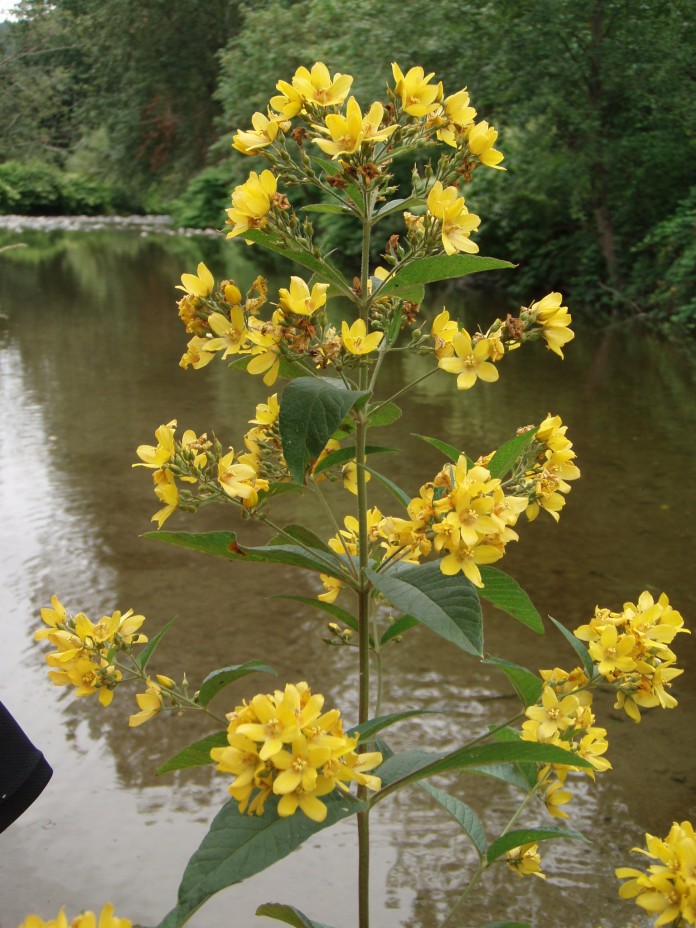 For more information about how to identify and control these noxious weeds, follow the links above or visit our website. Feel free to contact us with any questions, too, by calling 206-477-WEED (206-477-9333) or emailing noxious.weeds@kingcounty.gov.

Like Loading...
‹ Milk Thistle – May 2018 Weed of the Month
Invasive weeds that are ripe for action this time of year ›