King County noxious weed specialists are seeing all sorts of species showing up this month. Here are some recent finds.

Goatsrue is a Class A noxious weed found in southwestern King County, mostly in the Federal Way area. Toxic to livestock and very invasive in sunny areas, goatsue also has a very long-lived seed bank and tough perennial roots. Many years of control are required to eradicate this plant. Somewhat pretty, it resembles wild licorice (Glycyrrhiza lepidota), which has solid stems while goatsrue stems are hollow, and seed pods covered in bristles whereas goatsrue seeds pods are not. Goatsrue could also be confused with a vetch, for example American vetch (Vicia americana) when not in flower. However, vetch species have tendrils at the leaf tips and stems that grow over and around other plants, while goatsrue does not have tendrils and grows upright. If you need help with identification, please contact us in King County (or contact your local noxious weed board or extension office).

Spotted knapweed is a Class B noxious weed more familiar to eastern Washington residents that tends to travel west on the freeways, railroads and powerlines. However, spotted knapweed is also highly successful in western Washington in dry, well-drained soils such as roadsides and trails, sandy riverbanks, railroads, and open, sunny fields. There are significant infestations of spotted knapweed on the Snoqualmie and White Rivers as well as in Auburn, on I-90 and other similar areas of King County. 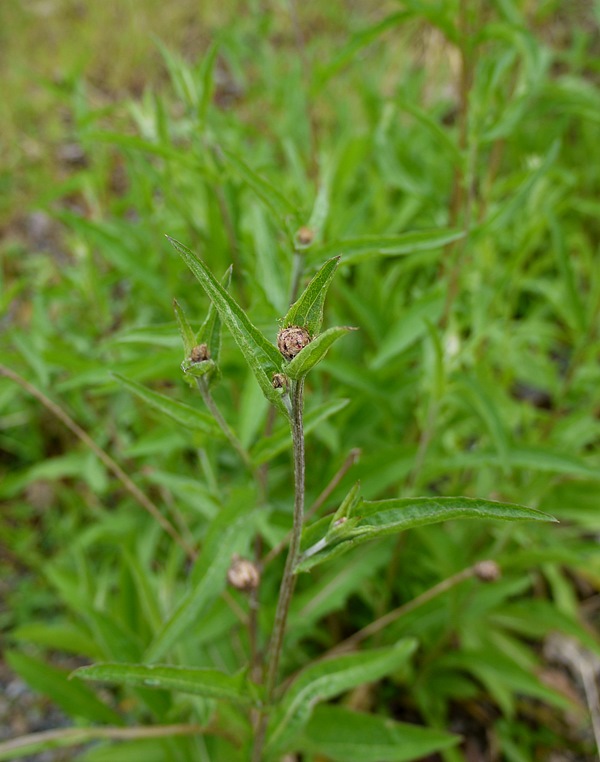 Meadow knapweed starting to form buds in early April. Photo by Matt Below.

Meadow knapweed is a Class B noxious weed that is well-adapted to western Washington’s pastures and fields, found in localized areas in eastern King County. Unlike spotted knapweed, this knapweed has tough perennial roots that are very difficult to remove manually and it is highly competitive even in well-developed grassy fields. Meadow knapweed has similar flower heads as other knapweeds, but the leaves are not at all distinctive, making this plant very difficult to spot before it flowers. Look for roundish buds that start out very dark but turn coppery brown when the flowers open up.

Sulfur cinquefoil emerging in early April. Photo by Matt Below.

Sulfur cinquefoil is a Class B noxious weed with leaves that resemble marijuana when they are young, but has no drug or medicinal use. Sulfur cinquefoil also resembles ornamental and native plants that are also in the Potentilla genus so it’s important to get a positive ID before controlling. Hairs on sulfur cinquefoil stems are very stiff and stick out straight from the stem, and the leaves tend to orient vertically, thus giving the plant its name Potentilla recta, meaning erect or upright. The flowers are also a pale yellow, which is where the common name sulfur comes from. Mostly found in gravelly, rocky soils, sulfur cinquefoil has a tough woody root stock and can be very hard to get rid of once it’s entrenched.