The expression that weeds don’t respect property lines applies more on lakes than anywhere else. Residents of four small lakes in King County are showing that working together as a community is the best way to overcome the challenges posed by lake weeds. By pooling their resources and volunteering their time, homeowners on lakes are saving money, improving the habitats of their lakes, and simply getting more enjoyment out of living on a lake.

At Shadow Lake, a small lake in SE King County, a group of residents formed a group this summer called “Restore the Shore” as part of an effort to control fragrant water lily and Eurasian watermilfoil at the lake. They organized by word of mouth and the Nextdoor networking site and gathered technical information and advice with help from Ben Peterson, aquatic noxious weed specialist with King County. One homeowner bought a specialized cutting tool, other tools were borrowed from the King County Noxious Weed Program, and then eleven neighbors got busy removing fragrant water lily pads from areas of the lake shore.

Area where lily pads were cut and removed (in the foreground). Photo by Holly D’Annunzio.

Water lily pads drying on a cement pad before being taken to the yard waste bin. Photo by Holly D’Annunzio.

These two photos show the area in Shadow Lake where lily pads were cut and removed (in the foreground) and the pile of water lily pads drying on a cement pad.  After they are dried, they put the lily pads in yard waste bins or dispose of them on burn piles.

According to group organizer Holly D’Annunzio, they quickly learned that removing lily pads is physical work and best done in teams of at least two people. 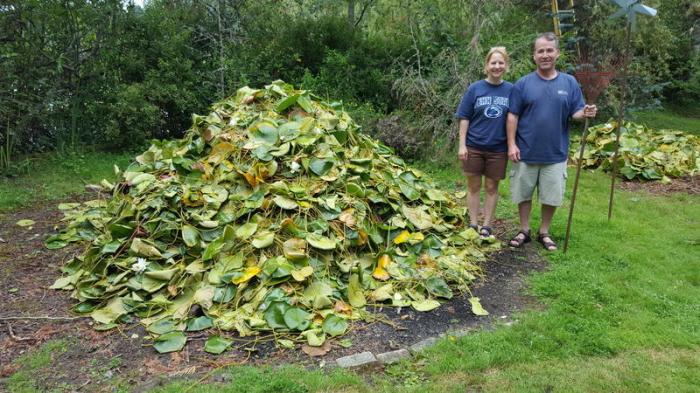 In an email, Holly shared this report.

“The nice part of our efforts is that we now know our neighbors. At the end of summer I sponsored a potluck with live music and invited Restore the Shore and other neighbors who joined Nextdoor. People rowed boats to it. I hope to sponsor a neighborhood gathering quarterly. We learned a lot from Ben Peterson about how to care for our beautiful lake and now hope to develop as a neighborhood. Many thanks to Ben’s leadership – we appreciate his interest, skill, and guidance. We will continue to apply his methods on Shadow Lake for years to come.”

At Lake Kathleen east of Renton, Keith Lanan is leading a community effort to control aquatic weeds as well as some nuisance native plants. King County noxious weed program staff help out with the purple loosestrife control by releasing loosestrife-eating insects and doing spot treatment each year on any loosestrife they can reach from a canoe. However, the weeds in the water, such as fragrant water lily and some nuisance native water plants, are beyond what the county program can manage.

In order to start tackling the weeds themselves, lake residents used their own funds and began by hiring a private contractor. When that proved to be too expensive, they got advice and information from Ben with King County’s noxious weed program so they could do the work themselves. According to Keith, licensing, permitting and getting incorporated as a non-profit were very time-consuming, but it was worth it. They have saved a lot of money by doing their own work and have more flexibility to accommodate homeowner concerns, desires and schedules. They have also managed to greatly reduce the water lily, pondweed and other nuisance plants and have improved recreational access and achieved a more balanced habitat. 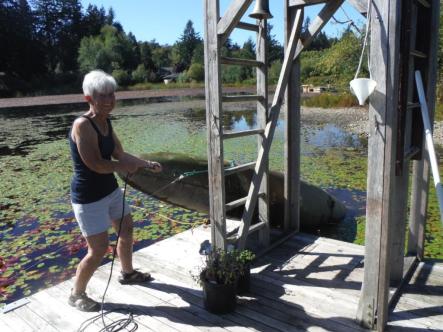 Keith got an unexpected bonus this fall during his lily pad patrol, a submerged relic from 1950’s aviation. Keith and friends managed to haul out the hefty drop tank from a 1950’s jet fighter (a F-86 Saberjet according to Keith’s research). A reporter from the Renton Reporter even came out and wrote a story about it. You never know what you’ll find when controlling weeds in a lake!

At Lake Alice near Fall City, two determined volunteers are also leading a community effort to battle invasive water lily. Bill Wheeler and Gerry Brewster started by self-funding the work, but in 2011 they successfully applied for a King County Opportunity Grant to help cover the costs. They hired a commercial contractor at first, but then the prices went up and they realized they could save money by doing it themselves. They transferred the state Ecology permit over to the community group, used some of the funds to buy a sprayer, and then Bill obtained an aquatic pesticide license so he could do the spraying himself. Bill estimates it cost them less than $100 per year to control the water lilies at the lake not counting the permit. 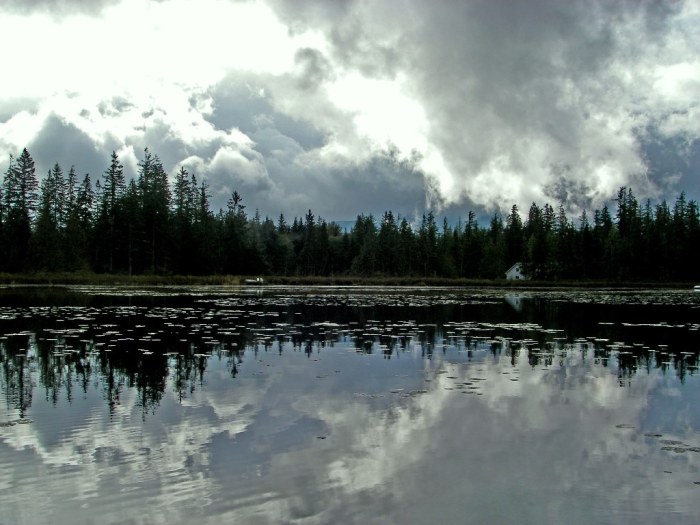 Another lake with an active community-based weed control effort is Spring Lake, where a few diligent volunteers have been controlling the lake’s purple loosestrife infestations and keeping tabs on water lily and Eurasian milfoil. This community effort has been going on for many years and each year there is less work to do to keep the weeds in check.

These are just a few of the lakes in King County where the residents are teaming up to tackle weeds. If you are interested in improving the habitat and recreational condition of your lake, please contact Ben Peterson, the Aquatic Weed Control Specialist at the King County Noxious Weed Control Program. For more information about aquatic weeds, you can download our Water Weeds guide or visit our website.

Giant hogweed just looks mean doesn’t it? All spiky and jagged looking! If you see this plant anywhere in King County please send us a report with King County Connect app or Report a Weed form on our website, link in bio. This photo is from a report we got this week so you can see what to look for right now. Remember use gloves to handle or control it to avoid the sap! And feel free to pull the ivy too if you’re working there anyways! #meanweeds #toxicweeds #gianthogweed #heracleummantegazzianum
Ahh, one more giant hogweed gone! Maria shows how to help our little patch of the earth one noxious weed at a time #earthday2021 #gianthogweed #diggingweeds #heracleummantegazzianum #poisonplants Selfie video by Maria Winkler
It’s garlic mustard time! Easier to spot now that it’s taller and a great time to control it before fully in flower or seed. Even though garlic mustard is tasty for people, it isn’t eaten by wildlife and does not leave room for PNW native forest plants. Help us spot it in King County and report it with King County Connect. Make sure to take photos, garlic mustard looks similar to a lot of other plants including native species like fringecup. Photo by Maria Winkler. #garlicmustard #alliariapetiolata #tastyplants #rightplantwrongplace #forestweeds
Yikes 😳 look at this massive giant hogweed patch we stumbled onto! Old seed heads, young healthy new growth, seedlings still with cotyledons, this site has it all. Message to everyone: don’t weed-whack your hogweed! It’s dangerous and it doesn’t do anything but spread it even more! This hogweed infestation on a vacant property and undeveloped roadway is unfortunately spreading to the neighbors and is going to be a huge effort to get rid of. Help us find hogweed early if you spot it, so we can avoid this happening anywhere else. Report noxious weeds with app King County Connect or email noxious.weeds@kingcounty.gov or DM me here. Photos by Maria Winkler. #badday #gianthogweed #beaconhill #heracleummantegazzianum