It’s time for King County to set the noxious weed list for 2017 and the public is encouraged to participate. The King County Noxious Weed Control Board’s annual Weed List Hearing is on Wednesday, January 18, 3:30 pm, at the Mercer Island Library, 4400 88th Ave SE, Mercer Island. The Board welcomes input from the public on setting the annual priorities for noxious weed control in King County, including which species property owners are required to control.

At the meeting, the Board will discuss and set the official King County Noxious Weed List for 2017. The Board will incorporate changes made to the state noxious weed list by the Washington State Noxious Weed Control Board as required by state law, as well as consider adjustments at the county level.

For 2017, the Washington State Noxious Weed Board only made one change with significance to King County’s list. The tall ornamental grass known as Ravenna grass (Saccharum ravennae) has been reclassified from the A list to the B list, and is no longer designated by the state for required control in King County.

Because it is a Class B weed, the King County Weed Board can select Ravenna grass for required local control in King County or they can add it to King County’s Non-Regulated Noxious Weed List and not require control. This decision will be considered at the January 18 meeting.

The Washington State Noxious Weed Control Board released the following information on its decision to reclassify Ravenna Grass:

It was added as a Class A noxious weed in 2015, which required that all plants be eradicated (destroyed) to eliminate the limited populations and prevent further spread in the state. However, after Ravenna grass was listed, we learned that it was more widely ornamentally planted than originally thought and that it wasn’t escaping cultivation as quickly in areas outside of Benton and Franklin counties.

In King County, we haven’t had any reports of Ravenna grass escaping cultivation even though it has been planted occasionally as an ornamental. Our weed specialists are keeping an eye out for this plant around the county, so please let us know if you spot any outside of cultivation (you can report the location online).

Background Info on Noxious Weed List
Each county in Washington is mandated by state law to require control of the noxious weeds designated by the state for that county (see the King County website on Weed Lists and Laws for more information). In addition, county weed boards can select additional state-listed noxious weeds for required control.

For instance, the King County Noxious Weed Control Board has selected tansy ragwort for required control in King County in past years due to its impact on livestock and hay production.

According to the state’s noxious weed law, county weed boards can only require control of species listed on the State Noxious Weed List, but they can add other species to the county weed list for educational purposes and to encourage their control where they are having an impact.

Control is generally only required for noxious weeds that are still limited enough in distribution to allow for effective containment and eradication. For example, the Class A noxious weed garlic mustard has the potential to seriously impact forest health in the county and is spreading on the Cedar River, but is still limited enough that countywide control is feasible.

English ivy, a Class C noxious weed in Washington, climbing a tree along a roadside. This widespread weed is not selected for required control, but control is recommended where possible. 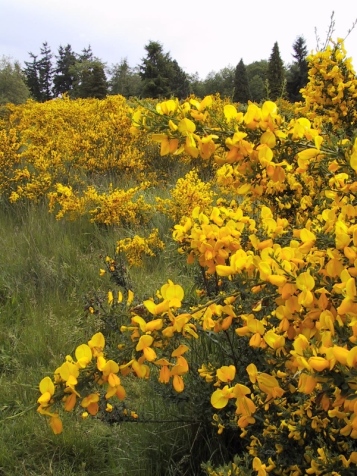 Scotch broom, a Class B noxious weed in Washington, not designated for required control in King County, Washington.

While these two introduced plants can significantly affect habitat, they are too widespread for county-wide control, so the county board instead focuses on outreach and education, encouraging control where feasible and teaching effective control methods.

For more information on the King County weed list and the Washington state noxious weed law, visit www.kingcounty.gov/weeds under “Weed Lists and Laws,” or contact Sasha Shaw at sasha.shaw@kingcounty.gov. The public is invited to attend and provide comments or proposals on weed list changes for the year. Comments can also be submitted in advance by email to noxious.weeds@kingcounty.gov.