Gorse is one of the earliest and most conspicuous noxious weeds to flower in King County, adding a little color to the otherwise dull-looking hillsides. Unfortunately, along with the attractive blooms comes a huge, thorny, invasive bush that is a fire hazard as well.

Gorse resembles Scotch broom but is covered with dense spines and starts flowering much earlier. Photo by Matt Below.

In years past, if you were on the ferry coming to West Seattle this time of year and noticed yellow-flowered bushes dotting the hillsides of Lincoln Park, you were probably looking at gorse. Although there is also Scotch broom scattered along that hillside, it usually doesn’t flower until late in March, whereas gorse starts blooming in February. This year we hope that you don’t see any flowering gorse on that hillside. After years of battling this infestation, Seattle Parks and King County Noxious Weeds have beaten it back to just a few plants.

King County noxious weed specialist Eric Walker hacks his way toward a large gorse plant on the hillside of Lincoln Park. Photo by Matt Below.

A year ago this month, a small band of King County weed specialists set out to do battle with the final remnants of gorse growing on the steep, sandy bluffs of Lincoln Park. After prospecting the best way in, they wielded machetes to cut their way through overgrown thickets of blackberry and ivy to get to the gorse stands. Some of the individual gorse trunks were several inches thick. They estimated there was about 600 square feet of gorse remaining, considerably reduced from when it was first noticed over fifteen years ago. Because of their work, we expect to see very little if any remaining this year. 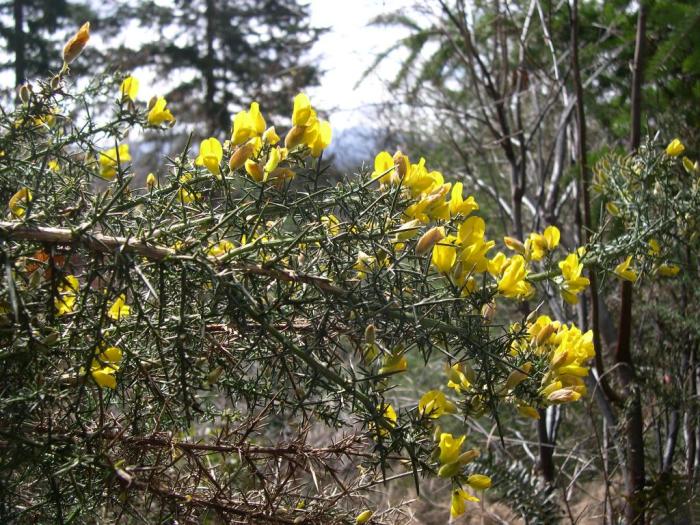 Gorse has striking golden yellow blossoms but is well-defended by its sharp, stout spines. Photo by Sasha Shaw.

As you may have heard, gorse has a fierce reputation, both in fiction and real life. In Winnie the Pooh’s story, when the balloon that’s carrying him is popped by angry bees, Pooh falls into a bush and gets covered with spines. That mean-looking bush was gorse. The same plant that in real life fueled a massive fire in the town of Bandon, Oregon in the 1930’s in which 14 people died and most of the town’s buildings burned down.

Gorse is a tall, densely growing shrub that looks like Scotch broom, but with thorns. Like Scotch broom, gorse invades open areas such as fields, shorelines and forest clearings, and crowds out other plants. The dangerous part about gorse is that it contains a volatile oil that can increase the risk of fire, especially when there are large stands of gorse like there were around Bandon. In addition, gorse can interfere with re-vegetation of forests and shoreline habitats and can suppress native wildflowers and forage plants.

A gorse stem just starting to flower in early spring is distinctive with its long, stout spines and its dense flower buds. Photo by Maria Winkler.

The upper stem is Scotch broom and the lower stem in gorse. Notice the dense thorns and buds on the gorse stem versus the sparse buds and lack of thorns on the Scotch broom stem. Photo by Maria Winkler.

Gorse has fragrant, yellow flowers in the characteristic shape of plants in the pea family. Photo by Matt Below.

Gorse, known scientifically as Ulex europeaus, does in fact originate from Europe as you might guess from the name. It was brought to the Pacific Northwest as an ornamental, likely due to its golden yellow blooms, which smell somewhat like cocoa butter, and its sturdy, easy-to-grow nature. 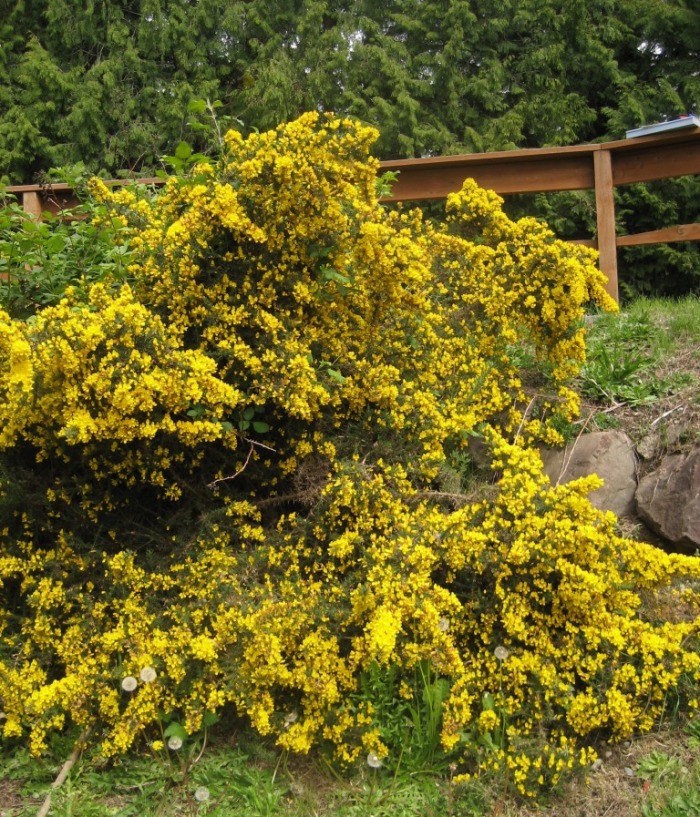 Gorse was introduced to Washington and Oregon as an ornamental flowering shrub in spite of its invasiveness, fire risk and sharp thorns.

It spreads only by seed, but the seeds are extremely durable and long-lived, remaining viable for decades. Also gorse will re-sprout from the crown if it is cut down and is very hard to control by any means.

Gorse re-sprouts from the crown if it is cut or damaged. Photo by Sasha Shaw.

Although it wasn’t planted as widely as Scotch broom, gorse has spread extensively along the Pacific Coast from Canada to California and even two Hawaiian islands. It also occurs in the northeastern United States. In King County, we only have occasional populations of gorse and we are getting the upper hand on all the areas we know about. However, the plants are tough and the seeds are long-lived, so we continue to see new plants show up and old ones re-grow.

It can be easy to spot flowering gorse this time of year when most of the other plants haven’t leafed out yet. Here it is mixed with blackberry on a hillside in the Magnolia neighborhood of Seattle. Photo by Sasha Shaw.

Early detection followed by effective control is very important in order to keep gorse from spreading to new areas and to reduce the risk of fire. You can read more about gorse on our web page or visit the Washington State Weed Board’s website. If you have any concerns about gorse or spot any new infestations, please contact the noxious weed program or report the location online.

Too much tansy ragwort for one hungry caterpillar! These cute cinnabar caterpillars are helping as best they can but they can’t keep up with the onslaught of tansy ragwort flowers. If you see a plump little guy like this one, just shake it off the tansy when you’re pulling it and it will find its way to another or just go pupate and start mothing. Tansy ragwort is toxic to horses, cattle, and other livestock. Eating even small amounts can damage their livers and over time it can kill them. Please help by pulling up flowering plants, roots and all, and then cutting off and bagging up the flowering tops for disposal with garbage. King County residents can email us for free disposal at transfer stations, noxious.weeds@kingcounty.gov (sorry Seattle residents, this won’t work for you, contact us for ideas if you’re stuck with a lot of tansy ragwort). Photo by Skye Pelliccia. #cinnabar #cinnabarcaterpillar #tansyragwort #jacobaeavulgaris #toxicplants #pastureweeds #horsesafety
Copycats! Two native plants flanking a noxious weed. Left to right: Douglas spiraea (hardback), purple loosestrife, fireweed. All in flower right now so easily confused. Purple loosestrife is a tall perennial with compact spikes of little flowers, squarish stems, mostly opposite leaves that are not toothed on the edges. Spiraea is a woody shrub with shorter leaves, toothed on the edges, alternate leaves, and “fuzzy” flower spikes (stamens stick out past the petals). Fireweed has looser flower spikes, larger flowers, alternate leaves, more or less round stems, and fluffy seeds that come out of long narrow pods. All three are popular with bees 🐝 but purple loosestrife also unfortunately 😢 fills in open wet areas, crowds out more beneficial species needed by wildlife, and generally does not play well with others where it’s been introduced outside of its native range in Europe. Photo by Skye Pelliccia. #copycats #lookalikes #purpleloosestrife #spirea #douglasspirea #chamaenerionangustifolium #spiraeadouglasii #lithrumsalicaria #epilobiumangustifolium #wetlands
It’s King County Fair time! Come visit us at the #enumclawexpocenter for the fun-filled #kingcountyfair Our booth has free pollinator seed packets, tons of great brochures on noxious weeds, questions answered by weed specialists, and free prizes for spinning the wheel! Look for us by the horse arena, next to @greenrivercoalition and the mechanical bull 🤠! #countyfair #beeseeds #noxiousweededucation #outreachbooth #enumclaw
Buried in loosestrife! Ben and Skye removed two boatloads of purple loosestrife from Lake Haller in Seattle! 💪 Just canoeing through all that water lily is impressive. If you have purple loosestrife on your lakeshore, cutting the stems at the base will keep it from going to seed but make sure to gather up all those stems and discard as garbage not yard waste to prevent them from spreading. Photo by Skye Pelliccia. #boatload #canoesandweeds #purpleloosestrife #lakelife #aquaticweeds #lythrumsalicaria