With shiny geranium, appearances are deceiving. Don’t let the plant’s small size or delicate pink flowers fool you. To quote Ed Alverson, a botanist from Oregon who has extensive experience battling shiny geranium, “this is pretty much the most diabolical invasive plant I’ve ever encountered”. He adds, “In my 3 decades of experience with this species I’ve not seen anyone successfully “control” it, anywhere or any time. Not that it is impossible, I’ve just not seen anyone take it as seriously as is necessary, especially early on”.

Shiny geranium (Geranium lucidum) was probably brought to North America by accident, first identified in the United States in 1971 growing in a cow pasture in Oregon. Since that time, it has spread to habitats that had previously been fairly resistant to invaders such as western Oregon’s oak woodlands.

In Oregon, there are areas where shiny geranium dominates the understory of woodlands, such as in this photo by Ed Alverson of a site on Mt. Pisgah in Lane County, OR.

In Washington, shiny geranium has been on the rise since it was first collected in the state in 2006. When it was added to the Washington State Noxious Weed List in 2009, it was classified as a Class A noxious weed because it seemed to be very limited in distribution. Unfortunately, it has been found over a much wider area since then and was moved to the Class B list in 2015. Sadly, on a statewide basis, Ed’s experience is holding true as the efforts in Washington have switched from statewide eradication to preventing further spread and trying to reduce it where we can.

Even though this plant has been down-graded in Washington, our goal in King County is still to eradicate it as best we can. As of this writing, we have records of 27 infestations, seven of which are on roadsides and the rest on a variety of different properties, including residential yards, city parks, schools, and even a former nursery site.

When Ed gave us his warning about shiny geranium, he also notified us about two patches of shiny geranium he spotted along King County roadsides, one on Snoqualmie Ridge he found last June and another in Sammamish a few weeks ago. Both sites were confirmed and are now being managed, hopefully on the way to being eradicated. These roadside locations pose a big threat of spread as roadside management often includes mowing, which can move the weeds farther.

In addition to roadside areas, many locations in King County have been linked to contaminated nursery plants or mulch materials.

Shiny geranium identification is not difficult, however it does take attention to detail. 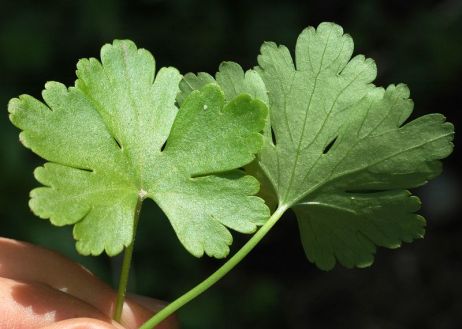 Leaves are rounded, lobed and shiny. Photo by Ben Legler. 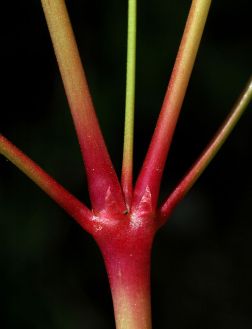 Stems are usually red or pinkish and not noticeably hairy. Photo by Ben Legler.

Flowers are tiny, pink, 5 petals and grow in pairs on delicate stems. Distinctive “keels” around the base of the flower (the sepals). Usually blooms April to July, sometimes as early as March. Photo by Ben Legler.

Shiny geranium look-alikes include dovefoot geranium and herb-Robert (stinky bob), both also weedy geranium species, but that are much more widespread.

Plants spread by seeds that are forcefully ejected up to 20 feet away even without wind. Also, the seeds are easily transported by animals, people, and in soil. On top of all that, seeds are highly viable and plants germinate several times a year. As a result, populations rapidly expand from a few plants to large, dense patches very quickly.

If you see any shiny geranium in King County, Washington, please report it to us as soon as possible so we can follow up on it and prevent it from spreading further. Our website has photos and information on shiny geranium as well as links to other great resources on this plant. In Washington outside of King County, please visit the Washington State Weed Board website. In Oregon, make sure to visit the Oregon Department of Agriculture website for more information. Feel free to contact us at King County Noxious Weeds if you have any questions about this plant or any other noxious weeds.