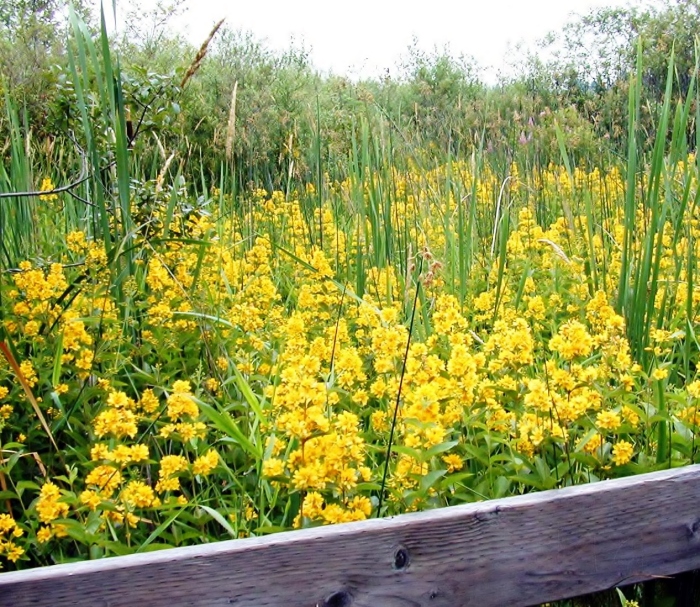 What plant is so tough that it can outcompete common cattail (Typha latifolia), purple loosestrife (Lythrum salicaria), and even Himalayan blackberry (Rubus armeniacus) along King County’s shores? Garden loosestrife (Lysimachia vulgaris), a Class B noxious weed from Eurasia, has managed this impressive takedown. First recorded in Washington in 1978 (on King County’s Lake Washington), garden loosestrife also occurs throughout the Northeast and in the western states of Colorado, Montana, and Oregon. But only in two states, Washington and Connecticut, is the plant disruptive enough to be designated a “noxious weed.” This may be because the colder winters in some of these states help to keep garden loosestrife populations in check. Whatever the reason, King County’s garden loosestrife is a beast of a plant, and it’s really hard to get rid of. 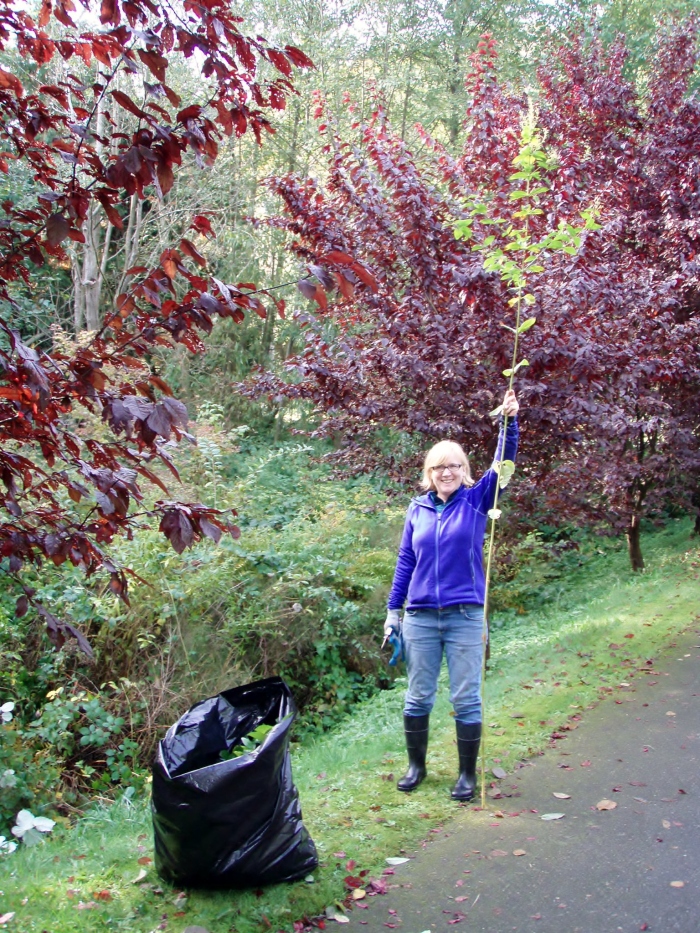 Garden loosestrife is a perennial plant that grows in wet areas such as river and stream banks, lakeshores, and wetlands. It usually grows 3-6 feet tall—sometimes reaching 10 feet—with round, erect stems covered in soft hairs. (In its native range, garden loosestrife tops out at about 4-5 feet) Its 3-5 inch long, ovate leaves occur in whorls of 3 (sometimes 2 or 4) and have hairy undersides. Showy, yellow, 5-petaled primrose-like flowers appear in clusters at stem ends between July and September. Flower bases are ringed by green sepals with distinct orange-brown edges.

Garden loosestrife’s ovate leaves grow in whorls of 3 (sometimes 2 or 4) on the stems.

The plant reproduces mostly via red rhizomes that can spread up to ten feet in open water. It also produces seeds in egg-shaped capsules, each of which has a few seeds.

Garden loosestrife spreads primarily through its red rhizomes, which can extend up to 10 ft.

Garden loosestrife also produces seeds in egg-shaped capsules, each of which holds a few seeds. 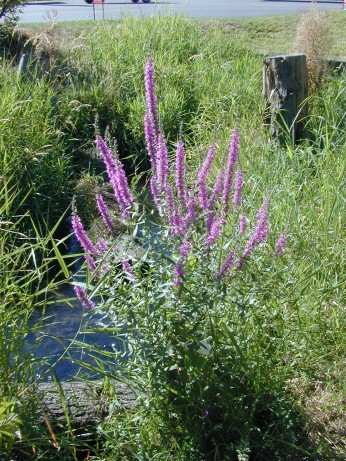 Yellow loosestrife’s flowers grow all along the stem.

Yellow loosestrife’s flowers are more pointed than those of garden loosestrife.

As we mention above, garden loosestrife can be very difficult to control. For the most part, digging is only practical for individual plants or small infestations. If you do use this method, make sure to dig out as much of the root system as possible—the plant breaks easily, leaving the roots behind to resprout. Mowing can help to slow a population’s growth, especially its spread by seed, but won’t eradicate it. For flowering mature plants, you can also cut the plants at the base to prevent seeding. 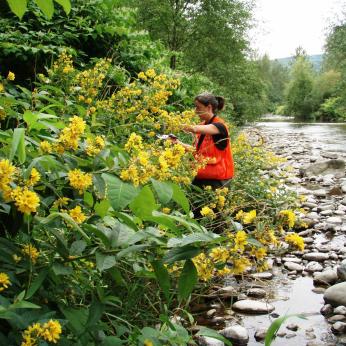 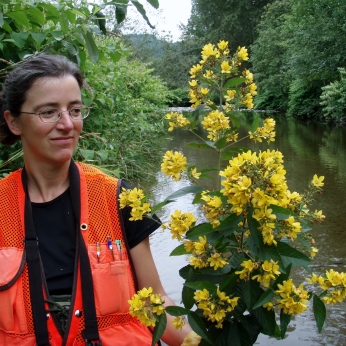 With all three methods, make sure to bag the plants—being careful not to disperse any seeds—and throw all fragments in the trash, not the compost. They can reroot if you leave them behind. Covering an infestation of seedlings with a landscaping fabric, black plastic, or cardboard and six inches of mulch can also help to slow growth and seed dispersal, but it won’t kill the roots of mature plants, and it isn’t possible in areas that flood. If you use this method, be sure to monitor the covering for gaps and check the edges for spreading rhizomes.

Garden loosestrife can be dug…

For large infestations, you may have to turn to an herbicide treatment. A number of herbicides are effective to varying degrees on garden loosestrife. Our program’s Aquatic Weed Specialist, Ben Peterson, is currently collaborating with Washington State University’s Tim Miller on a study about the effectiveness of various herbicides and herbicide combinations on garden loosestrife. You can find their recent results in this presentation. You can also find information on herbicide treatment, as well as ID and control methods, at the following pages:

These days, garden loosestrife infests the shorelines of Lake Washington, Lake Sammamish, and the Sammamish River, with smaller populations on Lake Burien, Rutherford Slough, the lower Snoqualmie River, the Raging River, and a few other locations. The invasions are especially worrisome because the plants can clog shallow waterways and displace native vegetation, reducing habitat for waterfowl and fish—including several important salmon species.

Rutherford Slough’s garden loosestrife infestation as of July 21, 2017. The infestations on the right, southeast portion of the slough are much smaller than those on the left.

Rutherford Slough, near the Snoqualmie River in Fall City, has been a particular focus area for our program. We first controlled the site in 2002, when garden loosestrife formed an 11 acre monoculture in the slough. Because garden loosestrife is less of a problem in other states, we found little advice on how to eradicate it. Starting in 2003, Rutherford Slough became our trial area for control methods. In 2007, our program received a grant from the Washington Department of Ecology to control garden loosestrife along the Snoqualmie River, thinking the plant had spread into the river from Rutherford Slough. The weed ended up being much more widespread, and harder to kill, than we’d expected. We’ve since made a big dent in the southeast part of the slough, which we’ve treated almost every year for the past eight years, as the below before and after photos show:

Rutherford Slough in 2003. The yellow streaks are garden loosestrife.

But we continue to battle the infestation, especially in the northwest half of the slough, where control has been intermittent for external reasons. “It’s popping,” says Weed Specialist Sawyard Glise, who joined Ben Peterson for a survey of the slough earlier this month. Apart from the heavy garden loosestrife infestation and reed canarygrass (Phalaris arundinacea), the slough has remarkably few invasive plants. But this weed hangs on. We’re still looking for the perfect way to eradicate it. 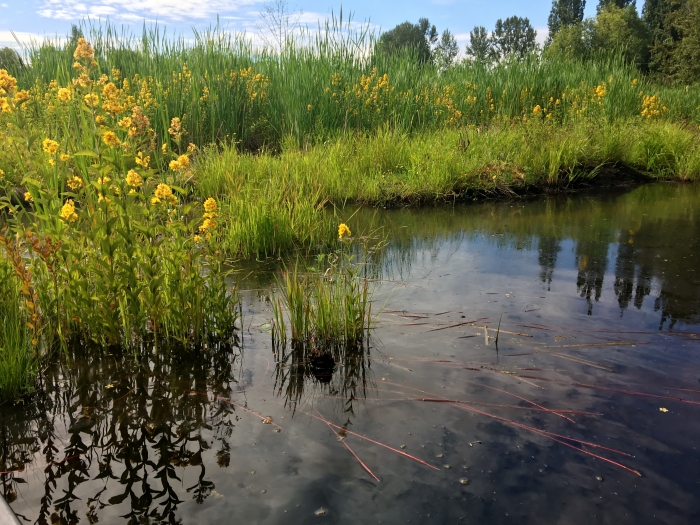 Rutherford Slough’s garden loosestrife infestation has been partially controlled, but we’re still trying to find the best way to eradicate the plant.

As always, if you have any questions about garden loosestrife identification or control, feel free to call us at 206-477-WEED (206-477-9333) or email us at noxious.weeds@kingcounty.gov. We look forward to hearing from you! 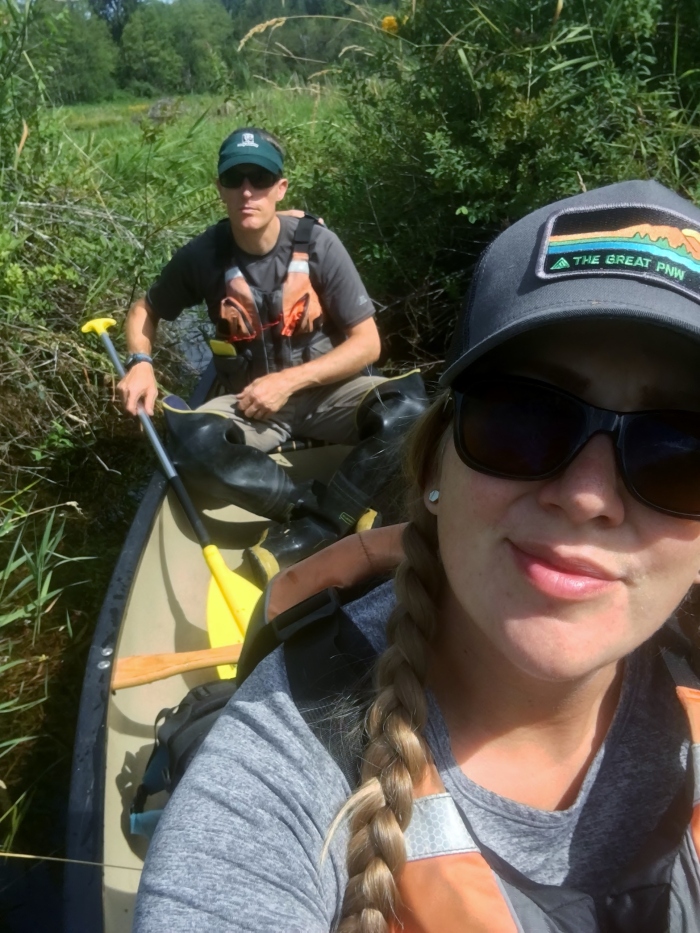 Take a moment to bask in the lovely native flowers of red flowering currant while you are out there controlling poison-hemlock and other noxious weeds. Photo by Karen Peterson. #redfloweringcurrant #ribessanguineum #pnwnativeplants #springflowers #notaweed
It’s time to look for poison-hemlock! February and March are perfect for spotting the lacy leaves and purple spotted stems, and the damp soil makes it easier to dig or pull them out. Wear gloves 🧤 and make sure you don’t accidentally ingest any, it’s very toxic! Photo by Karen Peterson #poisonhemlock #coniummaculatum #poisonplants #toxicplants
Always ready for fieldwork? Check out our job opening as a Noxious Weed Control Specialist at kingcounty.gov/jobs, apply by Feb 19. #fieldworkisfun #kingcountyjobs #botanyjobs #jobopening Photo by Ben Peterson.
Gorse! Spotted on the Tolt Pipeline trail just south of Duvall. Thank you wonderful person who reported this on our King County Connect app 😁 We can stop this one from getting out of hand because it’s pretty limited still. Gorse is like a really spiky version of Scotch broom, and even tougher to control and a higher fire risk too due to volatile oils. It’s usually in flower by late February so it looks like an early spring might be in the works. Gorse is Ulex europaeus to botanists and an introduced species in Washington, Class B noxious weed. It’s so helpful to find it early when it’s not as hard to control. Let us know if you spot any more in King County. Photos by Tom Erler. #gorse #spikyshrub #edrr #firehazard #ulex #ulexeuropaeus