Buffalobur – September 2017 Weed of the Month

Native to Mexico and the Midwestern United States, buffalobur (Solanum rostratum) is an annoying—and painful—regulated Class C noxious weed in King County. While we’re just a truck ride from its native range, this plant has effectively spread all over the world: You can find it in many parts of Europe and Asia, as well as in Australia, New Zealand, Libya, South Africa, and the U.S. Virgin Islands. Here in Washington State, buffalobur has often been introduced as a seed contaminant in flowers, vegetable, and even birdseed*. It can spread rapidly by seed and tolerates a wide range of conditions, making it a tough plant to control. If you have it, though, it’s probably flowering and producing burs, so now is a great time to get rid of it!

Buffalobur is an annual plant in the nightshade family that has straight, sharp spines on its leaves, stems, and flowers. It grows up to 2 feet tall with multi-branched stems and deeply lobed, veined leaves up to 5 inches long. From mid-summer to the first frost, the plant produces bright yellow, 1-inch-wide flowers with 5 petals joined at the stem base. Flowers are followed by spiny calyxes or “burs” that contain seeds. Buffalobur spreads entirely by seed, producing up to 8,500 seeds per plant. When the plant matures, its main stem breaks off and tosses in the wind, spreading the seeds. The seed-containing burs are also spread via animals, rain, and human activity. Buffalobur is self-fertile, so even a single plant can quickly create a big problem.

Buffalobur’s bright yellow flowers with 5 petals that join at the base. 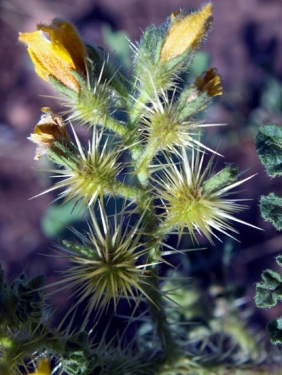 Buffaloburs characteristic burs. All told, one plant can produce up to 8,500 seeds. 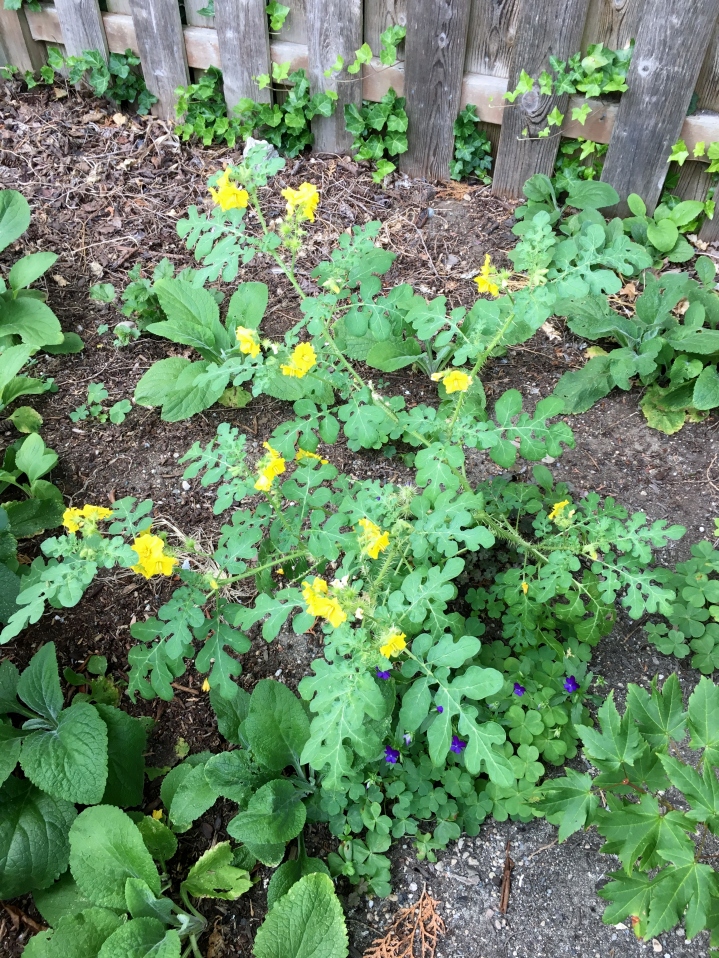 Buffalobur is especially troubling because it’s toxic to livestock. Its spines deter livestock from eating it, but they can also cause puncture wounds. Its burs stick in sheep’s wool, making the plant an extra headache for sheep owners even in its native range. Luckily, it’s fairly uncommon in King County, growing mostly in disturbed areas, roadsides, yards, and pastures. It likes sandy soil, but you can also find it in dry, hard soil, and moist soils in cultivated fields.

Fortunately, individual buffalobur plants aren’t too hard to remove. Just pull it by hand—wearing sturdy gloves—or dig it up with a shovel, making sure you cut the root at least 1 inch below ground level. Bag any burs and throw them in the trash. Larger infestations can be controlled through close mowing, hoeing, or with manually operated tools such as brush cutters, machetes, or loppers.  Maintaining healthy grass or another competitive vegetative cover will help to suppress buffalobur, too. Herbicide control can also be effective.

For more information on buffalobur ID and control, visit these pages:

*To avoid bringing in buffalobur with your birdseed, look for bird feed that is produced locally and/or ones that contain only one type of seed/feed, such as black-oil sunflower seeds or cracked corn. Avoid mixes purchased online that are coming from out-of-state; those often contain buffalobur seeds, as this weed is very common in other parts of the country and not regulated there.