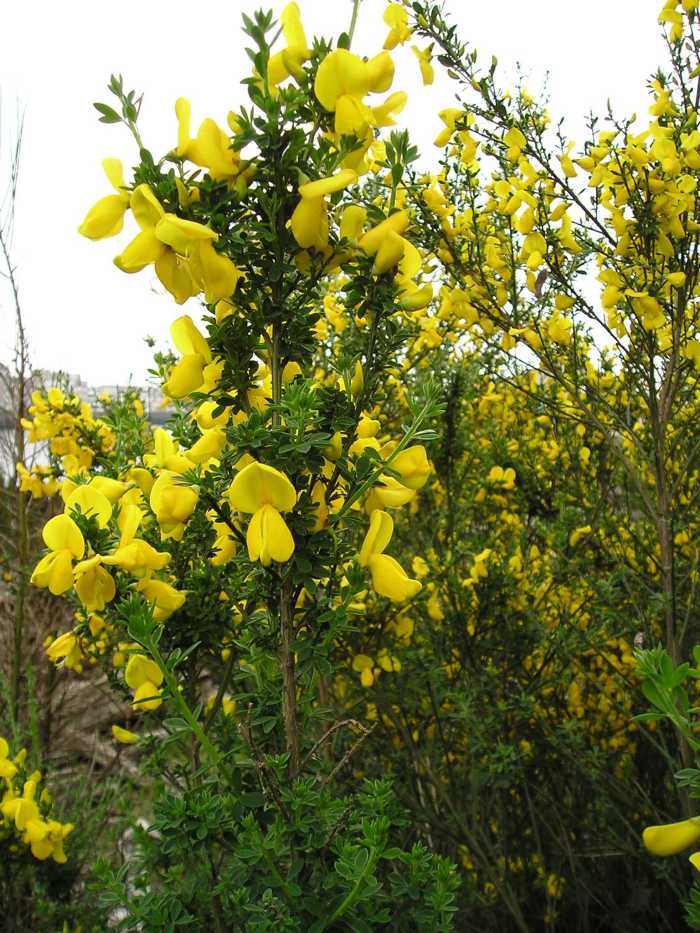 Scotch broom (Cytisus scoparius) in flower is a cheery yellow but that just doesn’t make up for how invasive it is in Washington.

There are three things I often hear about Scotch broom (or Scot’s broom, which may be the correct common name, but is not as commonly used). First, people tell me they hate this plant because they are allergic to it. Second, people tell me that the highway department plants it everywhere. And third, I hear from newcomers to the area that they think it is a native plant because of how widespread it is. Allow me to respond to each of these half-truth, half-myths.

First, the pollen of Scotch broom is very heavy and not very likely to be blowing in the wind. However, the odor is thought to trigger headaches and other miseries in people with other allergies such as to grass. So, by all means blame the Scotch broom, but you might also have other allergies to deal with. 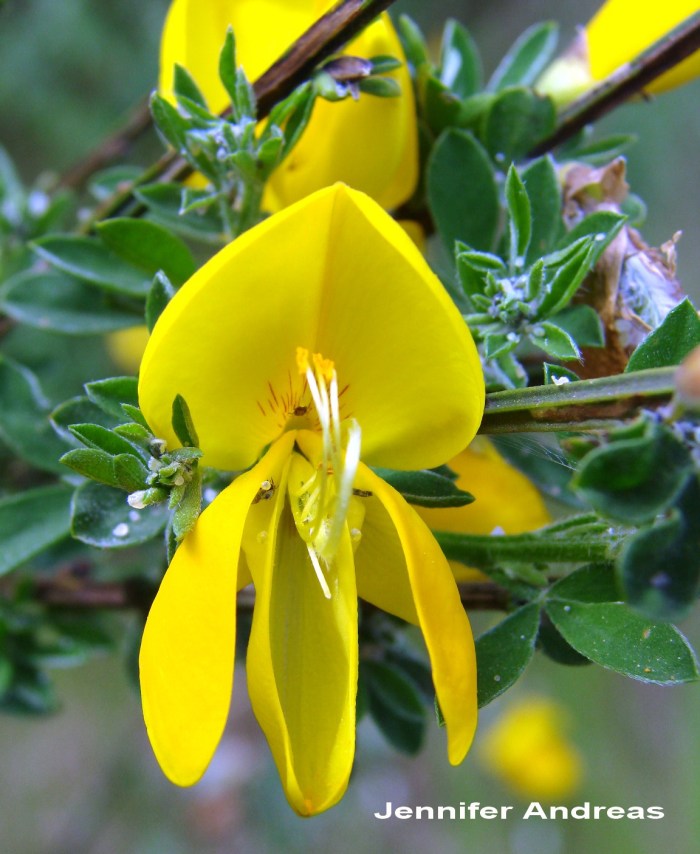 A open Scotch broom flower means it’s probably already been visited by a pollinator since the blooms usually don’t open by themselves. Photo by Jennifer Andreas.

Secondly, although the state and other agencies did perhaps use Scotch broom in the past for roadside plantings (there is some discrepancy when I ask transportation officials this question), they are for sure no longer planting this species of broom along Washington highways. When you see a newly constructed off-ramp or cleared highway shoulder suddenly sprout a field thick with Scotch broom, this is the legacy of the decades of Scotch broom seeding in the area, and not because of a misguided landscape plan. Unfortunately, broom seeds are so tough and so long-lived, that it is almost inevitable that this plant shows up whenever land is cleared, especially in highway rights-of-way where conditions are ideal for Scotch broom to prosper.

Scotch broom covering a hillside along a highway is a familiar sight in King County, but WSDOT doesn’t plant it. Scotch broom just plants itself. Photo by Sasha Shaw.

Finally, for those who believe this plant to be native to Washington, they are sadly mistaken. Invasive plants can become so entrenched and widespread that it is hard to tell them apart from native species (just look at Himalayan blackberry). However, historical records do show us that Scotch broom was introduced from Europe numerous times over many decades, beginning before 1900 and continuing to the present (people continue to plant varieties of this weedy species in spite of a state quarantine against selling it in Washington, and sometimes they even transplant it for the pretty flowers). 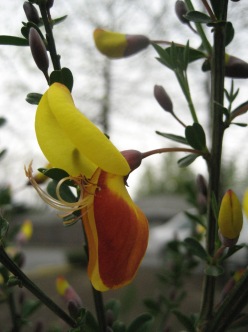 Scotch broom sometimes has red or orange color on its flowers, but it’s the same invasive species so don’t be fooled. Photo by Jennifer Andreas.

Scotch broom flower on a leafy stem, waiting for a pollinator to stop by. Photo by Jennifer Andreas.

As you may have noticed, Scotch broom can be found throughout most of Washington, especially west of the Cascades. It is also common all up and down the west coast from British Columbia to California. According to the records at the University of Washington WTU Herbarium, the first specimen in Washington was collected in 1892 in King County. The location is just listed as Seattle but the plant was described as naturalized, so it appears Scotch broom was already on the move before the 1900’s.

Scotch broom can grow very thickly in a grassy field, suppressing other plants.

In the 1920’s, collections were made from the campuses of WSU and UW as well as western Oregon and Thurston County. In the 1930’s, Scotch broom was found on Upper Tahoma Creek on Mount Rainier as well as numerous other places around the western part of the state. Botanical collections are just a snapshot of where plants occurred historically, but these examples show us just how widespread Scotch broom was by the early 1900’s and how far into wilderness areas it had already spread by the 1930’s. So it should come as no surprise that this is one of the most common weeds in our region now, ranging from urban to rural, disturbed to natural lands, coast to mountains.

Leafless Scotch broom in February on a neighborhood street in West Seattle. This plant is just too easy to find! Photo by Sasha Shaw.

If you are struggling with your own populations of this pervasive plant, then you can take heart that it has had a huge head start. If you add to this the longevity of the seeds (I am told they are viable 60 years or longer!), you definitely have to take the long view if you are going to successfully get rid of Scotch broom. Sometimes it might seem that nothing works to get rid of the stuff, but what is probably happening is new seedlings are popping up from the seeds in the soil or from seeds that are moved to the site on equipment or fill, or even carried in soil or water moving naturally into the area. 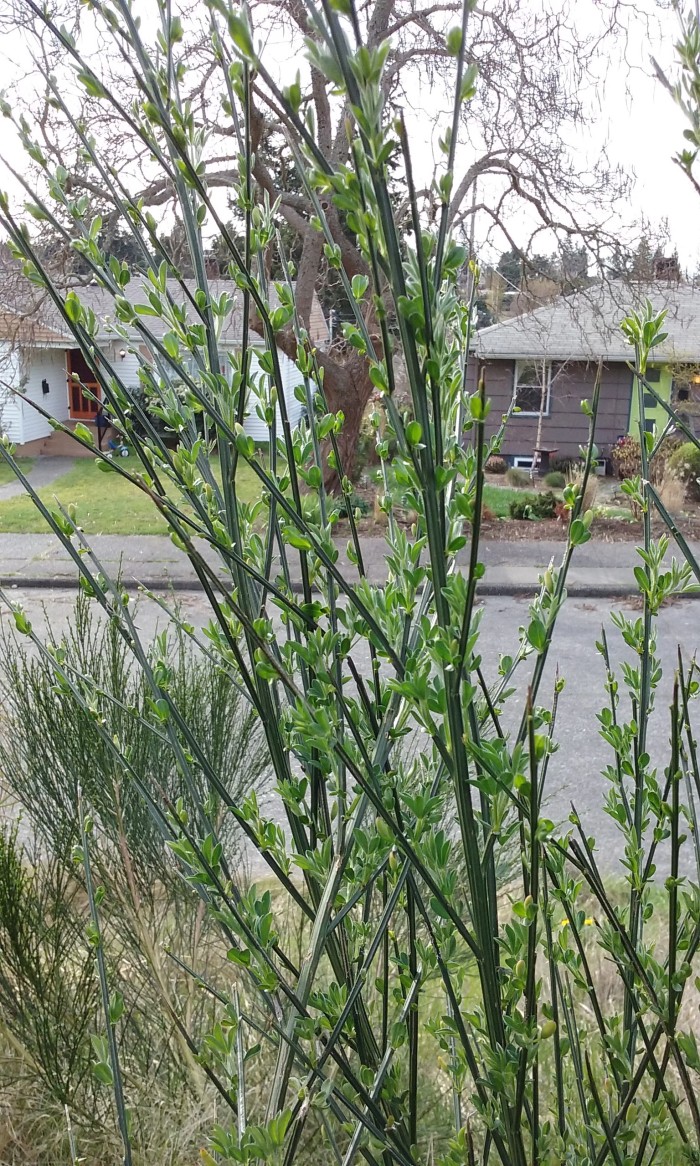 Shoots of Scotch broom beginning to leaf out in mid March. Photo by Sasha Shaw.

Even tall Scotch broom bushes can be uprooted with the help of a weed wrench type tool. 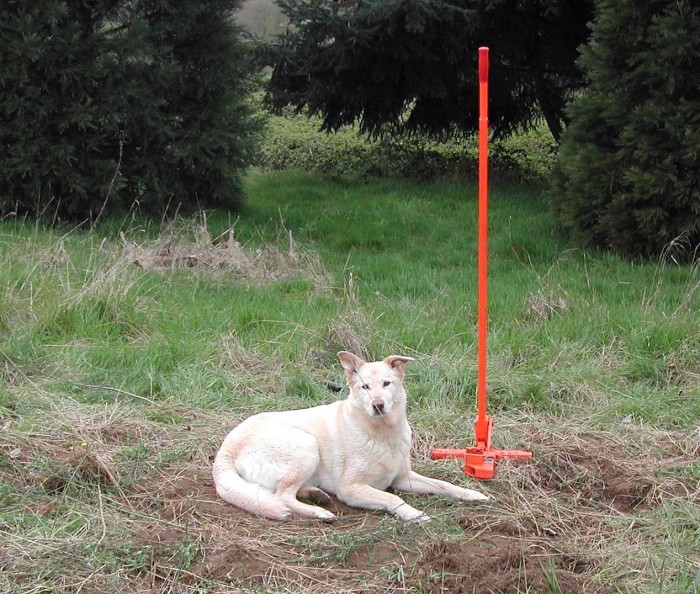 When you are all done pulling your Scotch broom, take a well-deserved break with your handy weed wrench.

Older plants can even be killed simply but cutting them down, if they are stressed sufficiently by summer drought. It’s not worth cutting the small green plants because they will just grow back. And remember that Scotch broom is evergreen, which means it’s always growing and always available for controlling! 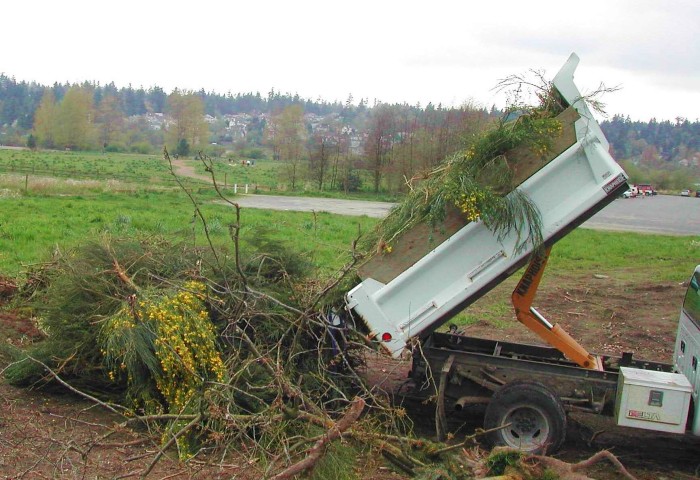 Scotch broom can be chipped, burned or composted on site. Just don’t dump it where it can spread!

In parts of the state where Scotch broom is still getting established, such as Kittitas and Chelan Counties, it is well worth the effort to try to control every population. In King County, we really need to focus on removing this plant from our parks and natural areas as well as the roadsides and rivers. However, this is a long term undertaking and will require a great deal of effort and patience. The only area were we are requiring control at this time is on I-90 east of North Bend (past Mile Post 34) and on Highway 2 where it comes into our county before heading over Stevens Pass. See King County Weed List for more information on this.

Fortunately, numerous city, county and state crews, community groups, volunteers, and private landowners are getting serious about removing Scotch broom. This is a great trend and perhaps we can hope for a time when this plant is much less dominant in our parks and natural areas in the county, and perhaps even in our own neighborhoods.

Other than the highways near the mountain passes, we are not tracking infestations of Scotch broom. However, if you or anyone you know would like information on removing Scotch broom, you can contact our office at noxious.weeds@kingcounty.gov or 206-477-9333 or check out our information online about Scotch broom. Also, we have several weed wrenches and other weed pullers available to loan out for free to county residents. Just give our office a call or send us an email to reserve a weed wrench.

Flowers of Scotch broom usually start appearing in early March or even late February, so watch for it in spring and remove it before it goes to seed. Remember, seeds last decades in the soil so it’s worth the effort!