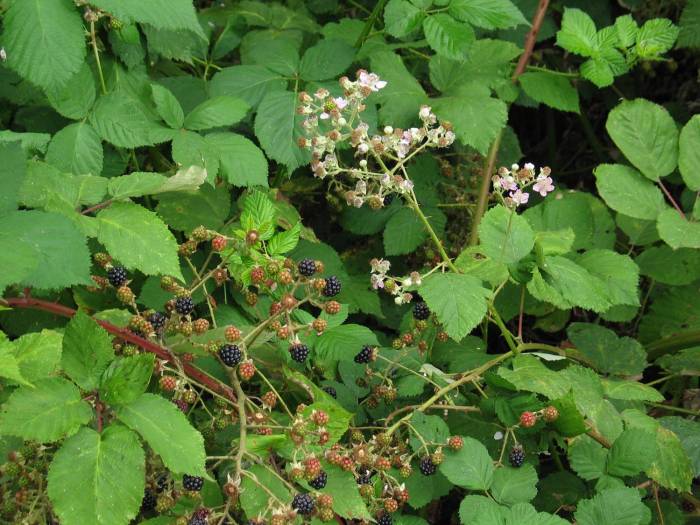 If Washington ever decided on a state weed, Himalayan blackberry (Rubus armeniacus) would be a strong contender. Some people hate its thorns, some love its berries, but almost everyone has a strong opinion about it. Yet, for all its fame, this plant has only grown in our region for a little over one hundred years—a striking example of just how quickly a noxious weed can take over.

Even the origins of Himalayan blackberry are almost mythic: In the late 1800s, botanist/entrepreneur Luther Burbank brought the plant to his California farm in the hope of selling it far and wide. Burbank was a constant experimenter; his creations include the Shasta daisy, elephant garlic, and the predecessor to the Russet potato. His newfound blackberry was both vigorous and delicious, and grew especially well in temperate climates. It seemed to Burbank like the perfect fit. (Thinking the plant was from India, Burbank named it “Himalayan Giant,” although it actually originated in Armenia.)

Luther Burbank admiring one of his many developments, a blue poppy. “Luther Burbank 1900 Papaver” by unknown author, Library of Congress / CC BY 2.0.

A century later, those same traits have created an ecological disaster throughout much of the United States. Himalayan blackberry stems (often called canes) are large, thick, arching, star-shaped in cross-section, and have big thorns. They can quickly grow up to 15 feet tall and 40 feet long, outcompeting many other plants and forming dense monocultures. The plant spreads by forming roots at the tips of its arching canes, as well as through white to pink flowers that look like those of wild rose and produce up to 13,000 seeds per yard.

It dominates in disturbed sites, such as empty lots and roadsides, but also more intact habitats such as riparian areas and open spaces. Himalayan blackberry is especially troublesome along riverbanks: overhanging branches can hide eroding banks, while its aggressive growth prevents trees from establishing that might stabilize the banks and shade the water. Himalayan blackberry’s damage extends to animal species, too: in a 2010 study based in British Columbia, the author found a decrease in breeding bird species within areas dominated by Himalayan blackberry. 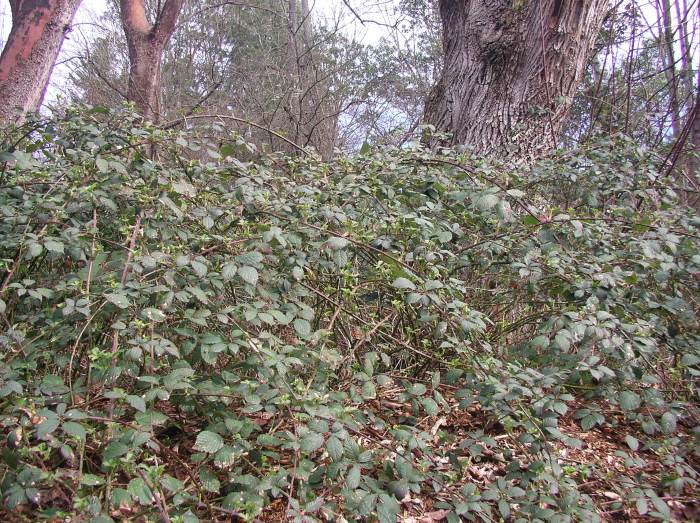 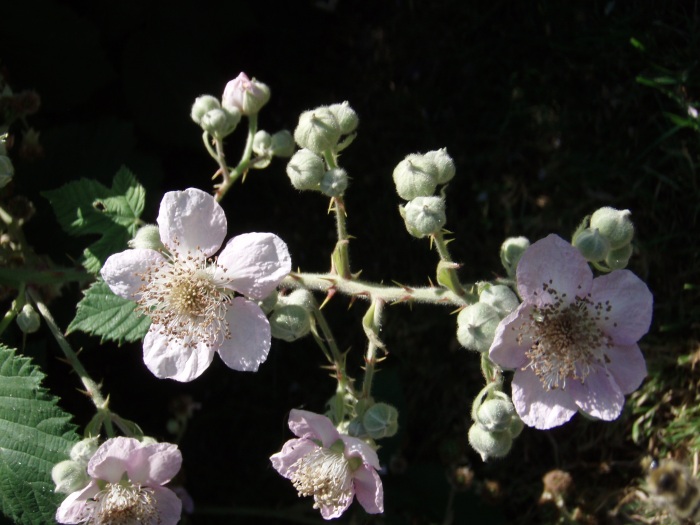 Himalayan blackberry’s large, toothed, rounded to oblong leaves usually appear in groups of 5 (younger leaves are sometimes in groups of 3).

Luckily, while these two species are probably here to stay in the Pacific Northwest given how widespread they are, neither are impossible to get rid of in a particular area (albeit with a little blood, sweat and tears). Because of their invasiveness and impacts on natural and agricultural resources, both species of blackberry are Class C Noxious Weeds in Washington. They are not regulated in King County, meaning control is not required but is encouraged as part of conservation, restoration, forestry or other land management practices. The decision to control blackberry and how to do it depends a lot on what your goals are and what resources you have. It’s not easy, but the benefits can be huge! For more information on invasive blackberry control, see the following resources:

Last, if you understand the damage these two invasive plants cause, but really love the taste of blackberries, we have a solution for you: trailing blackberry (Rubus ursinus), a low-growing native blackberry with slender stems and alternate leaves divided into 3 leaflets. It doesn’t produce as many berries as the two invasive species, but many people say they taste even better. Once you’ve eradicated your invasive blackberries, consider planting some trailing blackberry in their place—that way, you can still enjoy those freshly picked blackberries!

Trailing blackberry is low-growing, with alternate leaves divided into 3 leaflets.

Take a moment to bask in the lovely native flowers of red flowering currant while you are out there controlling poison-hemlock and other noxious weeds. Photo by Karen Peterson. #redfloweringcurrant #ribessanguineum #pnwnativeplants #springflowers #notaweed
It’s time to look for poison-hemlock! February and March are perfect for spotting the lacy leaves and purple spotted stems, and the damp soil makes it easier to dig or pull them out. Wear gloves 🧤 and make sure you don’t accidentally ingest any, it’s very toxic! Photo by Karen Peterson #poisonhemlock #coniummaculatum #poisonplants #toxicplants
Always ready for fieldwork? Check out our job opening as a Noxious Weed Control Specialist at kingcounty.gov/jobs, apply by Feb 19. #fieldworkisfun #kingcountyjobs #botanyjobs #jobopening Photo by Ben Peterson.
Gorse! Spotted on the Tolt Pipeline trail just south of Duvall. Thank you wonderful person who reported this on our King County Connect app 😁 We can stop this one from getting out of hand because it’s pretty limited still. Gorse is like a really spiky version of Scotch broom, and even tougher to control and a higher fire risk too due to volatile oils. It’s usually in flower by late February so it looks like an early spring might be in the works. Gorse is Ulex europaeus to botanists and an introduced species in Washington, Class B noxious weed. It’s so helpful to find it early when it’s not as hard to control. Let us know if you spot any more in King County. Photos by Tom Erler. #gorse #spikyshrub #edrr #firehazard #ulex #ulexeuropaeus