Control weeds in the fall to reduce work next year

In the cool, autumn months after the rains start up again, there is a window of opportunity for controlling many weeds. Digging and even hand-pulling is very effective in the fall when the soil loosens up with the rain and before it gets too soggy and heavy to work. Also, some weeds are germinating from seed now, so this is a good time to spread cardboard and wood chips or other mulch to keep weeds from developing and to prevent germination of other weeds in the early spring. Many plants, especially biennials and winter annuals, build up their root reserves in the fall and winter so this is a good time to seek them out. It’s easier to control a weed when it is young. 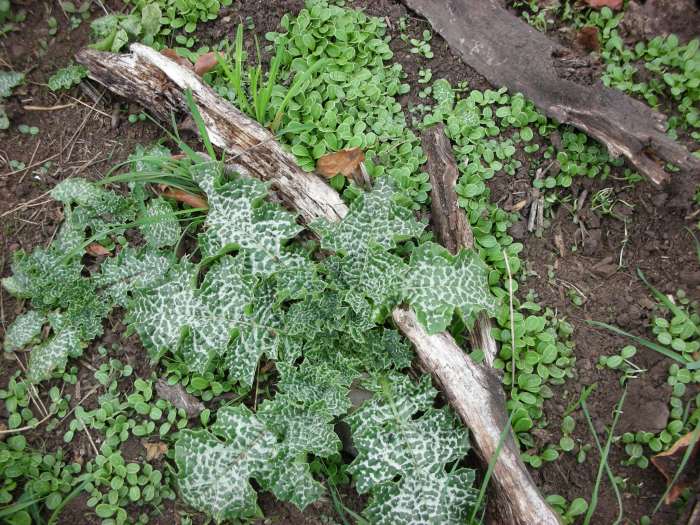 Milk thistle can often be found as a rosette or seedling in the fall wherever mature plants were seen in the summer, especially in areas with disturbed or bare soil. Photo by Tricia MacLaren.

Garlic mustard rosettes can be found under leaf litter in the fall, where they are overwintering in preparation for early spring growth. Photo by Sasha Shaw. 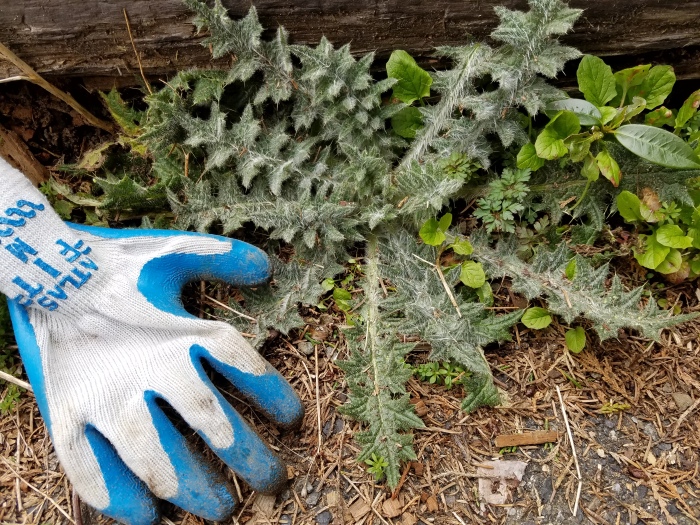 Rosettes of biennials like bull thistle can be found growing all fall and winter, building up their roots in preparation for their upward growth in the spring.

Poison-hemlock can be found and easily dug up anytime from fall to spring before it starts to grow tall. Just make sure not to confuse it with a carrot plant! Photo by Sasha Shaw.

Some plants just don’t know when to quit growing and may even still be flowering into October or later. We have a long fall growing season before the first hard frost so deep-rooted perennial plants like knotweed and phragmites take advantage of the mild weather to beef up their roots for next year’s growth.

Phragmites, or common reed, is an invasive tall wetland grass that flowers in late summer. Photo by Maria Winkler.

Japanese knotweed grows until the first frost. The green stems in the foreground are re-growing after being cut earlier in the summer and the stems in the back are beginning to send energy from leaves to roots. Photo by Karen Peterson. 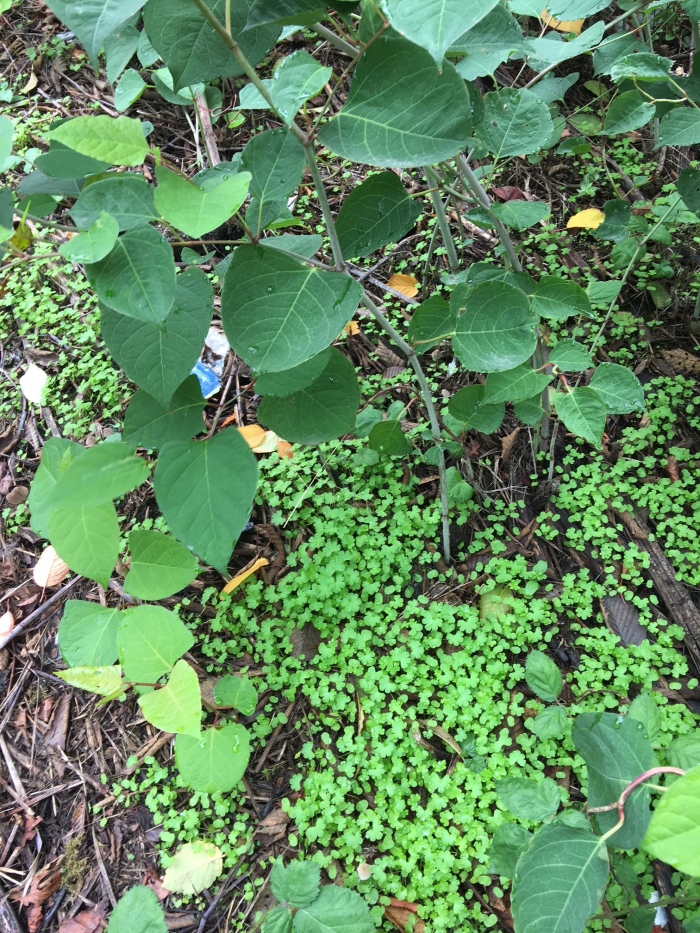 Sometimes the noxious weeds team up. Here fall re-growth of Japanese knotweed is surrounded by new seedlings of shiny geranium, a noxious weed that is on the rise in King County, Washington. Photo by Maria Winkler.

If perennials are mowed or damaged in some way, they can regrow and flower later in the season. We often see this with spotted knapweed and tansy ragwort in particular, but it can happen with just about any plant.

Spotted knapweed that is cut during the summer will flower again in the fall on shorter stem. Mowing is not a good way to keep this plant from spreading! Photo courtesy of King County.

Spotted knapweed often continues flowering into the fall months. This plant on the Snoqualmie River has both empty seedheads and new flowers forming on the same plant. Photo by Ashley Shattuck. 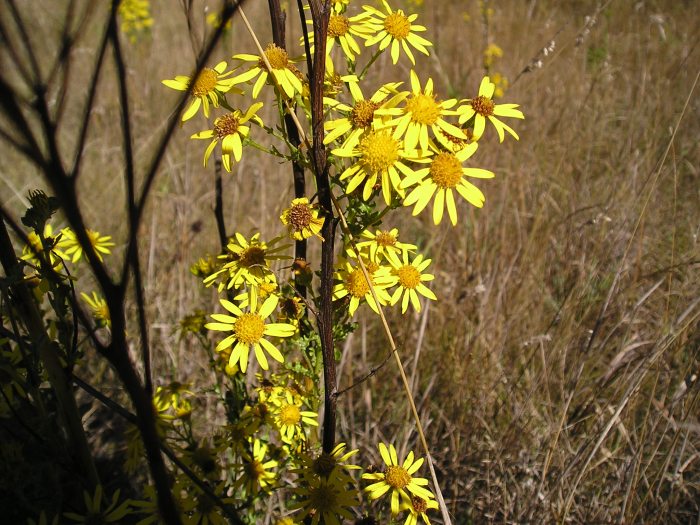 Tansy ragwort can form new flowers late in the fall on leafless or damaged stems after plants have been mowed or after the cinnabar caterpillars have finished eating the leaves and dropped off to become moths. Photo courtesy of King County.

Blackberry can be a great target for fall weed control work. Both of our invasive blackberry species, Himalayan and evergreen, are still growing quite actively in October and November. Also, controlling blackberry thickets now can have less impact on native vegetation, which is going dormant, and birds, which nest in the spring. Just make sure when digging up blackberry to protect soil from being washed into streams and rivers. In sensitive areas, use hand-operated tools only, not heavy equipment that can increase erosion and soil damage.

In the fall roots of evergreen blackberry can come out more easily – just make sure to wear gloves! Photo by Sasha Shaw.

Fall control of invasive vines will reduce weight on trees over the windy, rainy winter. Our wet, windy winters are a big challenge for trees, especially when they are weighted down by mounds of English ivy, Clematis (old man’s beard) or bittersweet nightshade vines. These vines can create a sail effect, catching the wind and creating more stress on the trees in strong winds, and weigh down branches with all their extra weight. Also, ivy and clematis can develop into thick, heavy stems, so it is like having lots of small trees covering your tree. Also, vines can make it tough to know how healthy a tree is and can mask problems with rot and dead limbs. If you are unsure how healthy the tree is under all those vines and it is anywhere near buildings or trails, make sure to get an arborist or forester to check for you before it becomes a safety hazard. 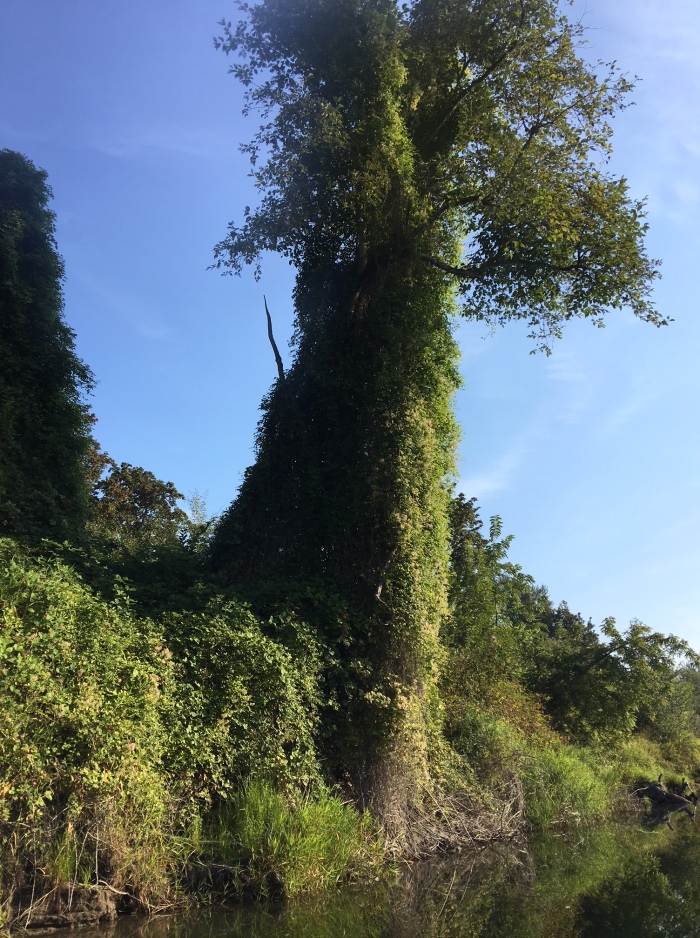 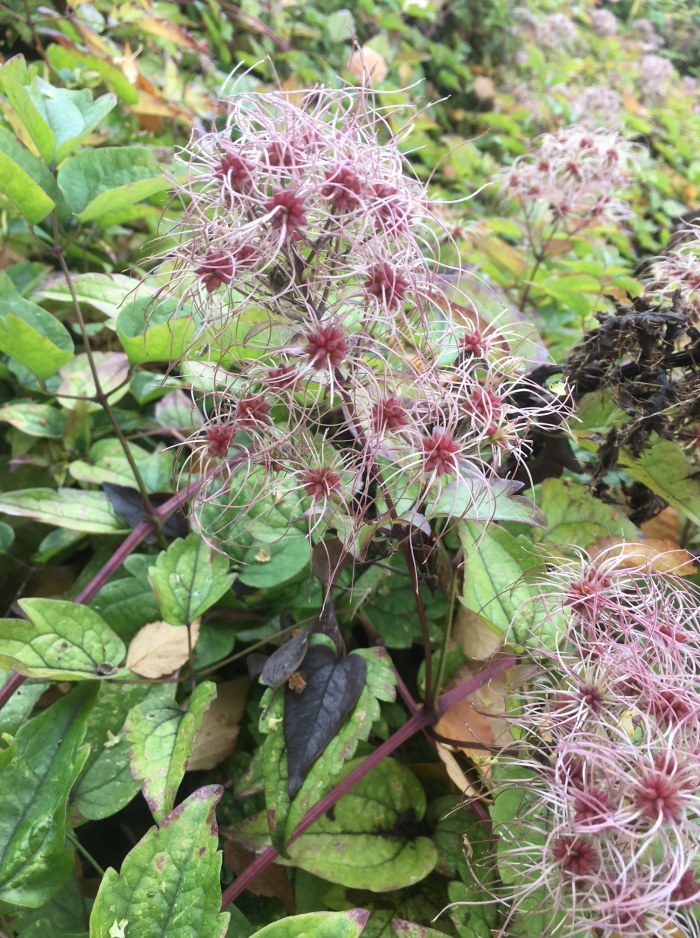 This tree covered with English ivy toppled over onto a city sidewalk and street, fortunately with no cars or people were present. Photo by Sasha Shaw. 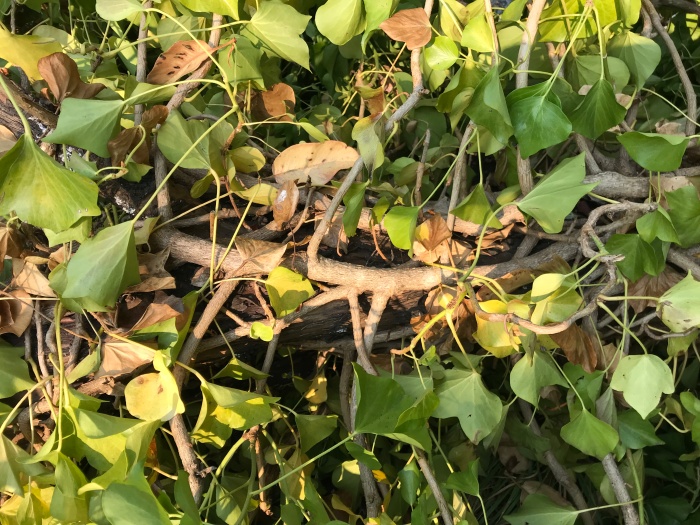 The bark of this fallen tree is barely visible through the dense English ivy vines covering the trunk. Photo by Sasha Shaw.

Bittersweet nightshade (Solanum dulcamara) is a poisonous plant as well as an invasive vine that can climb up and over other vegetation. The leaves often turn purplish in the fall. Photo by Karen Peterson.

Good fall pasture management will reduce weed problems in pasture areas next year. The same practices that help you protect healthy pasture soils and reduce erosion will also reduce your pasture weed problems. It’s important to keep livestock off saturated soils to avoid damaging pasture plants and leaving openings for weeds. Weeds do much better in compacted soils than grasses so protecting your soil in the wet months will help reduce weed issues. Also, any exposed soil is an opportunity for a weed to take hold, so make sure to spread an appropriate pasture seed mix over any thinly vegetated areas or where there was a lot of traffic over the summer. To get ready for the winter, control the weeds, fertilize, and add lime to reduce your work in the spring. Also, storing manure under cover will help reduce the amount of weed seeds blowing into it and will improve the quality of the manure for mulch. For more information on pasture management, contact your local conservation district office. In King County, contact the King Conservation District. 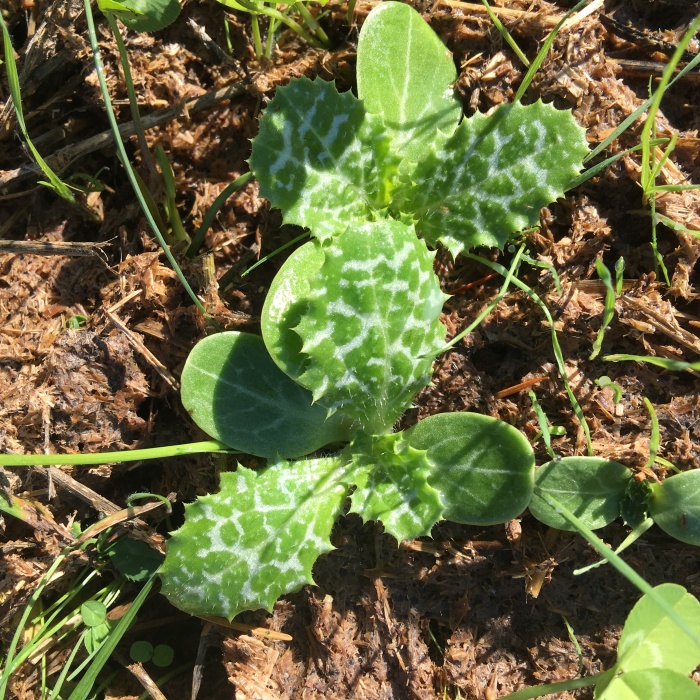 Milk thistle seedlings appear in the fall in bare areas. The leaves already have their distinctive white marbling and spiny edges in contrast with the cotyledons. Photo by Dan Sorensen.

Areas disturbed by animals or otherwise left bare can be quickly populated by noxious weeds such as milk thistle. Photo by Dan Sorensen. 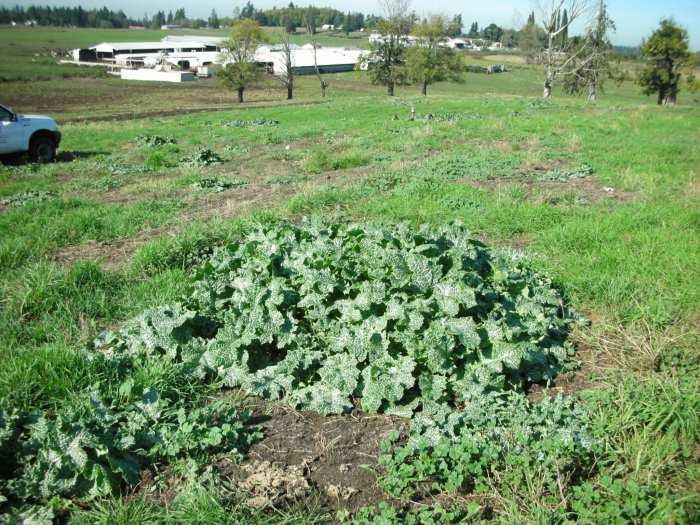 Good pasture management will help reduce noxious weed problems such as this milk thistle in a pasture. Fall control of weeds can help reduce the work needed next spring and allow grass to re-establish. Photo by Tricia MacLaren.

After you remove weeds in the fall, it’s a great time to plant hardy native shrubs and trees that will provide habitat for wildlife, improve water quality and protect the soil (see kingcounty.gov/gonative for suggestions).

Like Loading...
‹ Fall is a great time to volunteer at stewardship events
What’s the connection between Washington’s fruit crops and tree-of-heaven? ›