On January 23, the King County Noxious Weed Control Board is holding its annual weed list hearing, including a proposal to make poison-hemlock a regulated noxious weed, with control required on public lands. The Board welcomes public input on this proposal, and on any other issues related to the county noxious weed list. Comments can be shared in person at the meeting or before the meeting by email at noxious.weeds@kingcounty.gov. The Board Meeting and Weed List Hearing is on Wednesday, January 23, 3:30-5:30 pm at the Snoqualmie Library, 7824 Center Boulevard SE, Snoqualmie WA 98065.

Poison-hemlock (Conium maculatum) is a toxic biennial plant originally from Europe that has spread throughout North America. People and livestock can die or become seriously ill after eating this plant. It is also highly invasive and can form large, dense stands excluding other plants. Poison-hemlock is found in many places in King County, including roadsides, trails, fields, parks and around homes and gardens. When young, it closely resembles carrots and other edible plants in the Carrot Family. After it flowers, the plant is easier to identify but could be confused with fennel or anise. Key identification characters are: purple-red spots on hairless stems, tiny white flowers in clusters, 6-10 foot tall flowering stems, and lacy leaves with a musty smell. [Read more about poison-hemlock]

Poison-hemlock plants from above look similar to carrot plants, but are much larger. Photo by Nate Dolton-Thornton. 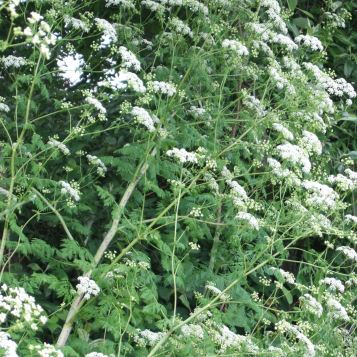 Flowers of poison-hemlock are in numerous umbrella-shaped clusters on the ends of branched flowering stems. Photo by Sasha Shaw. 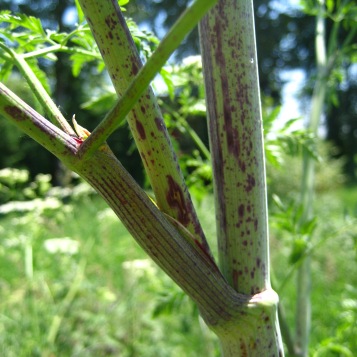 The stem of poison-hemlock is distinctive with its purple blotches, lack of hairs, and often a waxy coating. Photo by Frances Lucero.

At the January 23 meeting, King County’s Noxious Weed Control Board will consider a proposal to add poison-hemlock to the King County list of regulated weeds, with control required on public properties and roadsides. This would be a change from its current non-regulated status, where control is recommended but not required. The proposal does not include a requirement to control the plant on private property, but county staff will notify private property owners if poison-hemlock is found on their property to alert them about its presence.

Poison-hemlock can be found along many roads in King County. In summer, look for numerous umbrella-shaped clusters of tiny white flowers, fern-like leaves, and hairless stems with reddish-purple splotches. Photo by Maria Winkler.

Poison-hemlock is easy to spot in April when it starts to grow taller, such as along this sidewalk in West Seattle. Photo by Anna Shaw.

Posters alerting people to poison-hemlock can be posted at community gardens or other public places.

Background Info on Noxious Weed List
Each county in Washington is mandated by state law to require control of the noxious weeds designated by the state for that county (see the Washington State Noxious Weed Control Board website for more information). In addition, county weed boards can select additional state-listed noxious weeds for required control.

According to the state’s noxious weed law, county weed boards can only require control of species listed on the State Noxious Weed List, but they can add other species to the county weed list for educational purposes and to encourage their control where they are having an impact. Control is generally only required for noxious weeds that are still limited enough in distribution to allow for effective containment and eradication. For widespread noxious weeds, the Board encourages control through education and technical assistance. 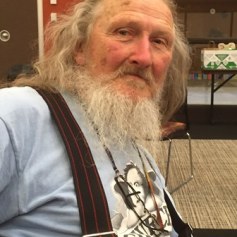 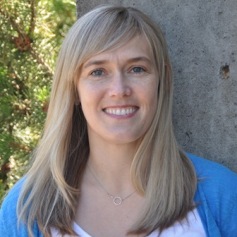