Cows and horses don’t seek out poisonous plants like tansy ragwort. But it’s hard for them to avoid exposure when the weeds take over their pastures, or line the trails where they are ridden. Although tansy ragwort is bitter and not any animal’s favorite plant, they often eat enough of it to get sick, and can even die from the liver damage it causes. Tansy ragwort remains toxic after it is dry but loses some of its bitterness, so even more exposure can happen after the plants are mowed or when mixed in with hay. Even if the animals don’t seem to be eating the tansy ragwort, why take a risk? Just pull those plants before they go to seed!

Read about protecting horses and cattle from tansy ragwort.

Tansy ragwort (Senecio jacobaea) was such a huge problem in King County in the 1970’s that a group of concerned citizens formed a volunteer weed board to try to tackle the problem.

Even though there wasn’t any dedicated county funding back then, and certainly no high-tech mapping programs or even computers, the volunteer weed board members started documenting tansy ragwort infestations on old-fashioned note cards and Polaroid photos, and educating people at the county fair and other community events.

They couldn’t enforce the state noxious weed law due to lack of funding, but they began asking road crews and pasture owners to voluntarily control this toxic plant, and managed to get a lot of tansy ragwort controlled in spite of all the obstacles. 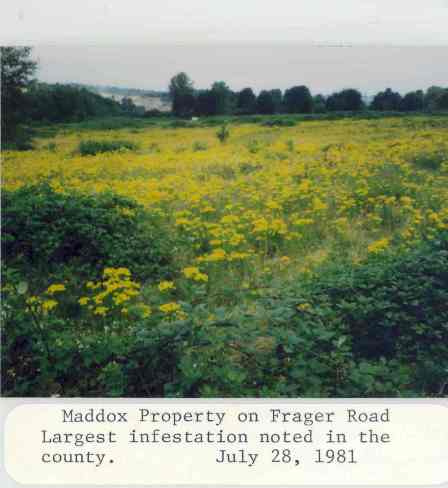 The caption on this 1981 photo says this was the largest infestation in King County at the time. 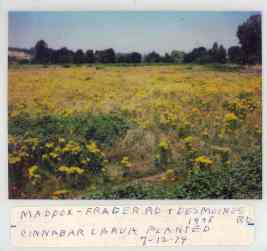 1979 photo of a large field full of tansy ragwort where biocontrol insects were released.

Photo from 1981 of tansy ragwort along Military Road south of Seattle.

Since those early years, the King County Noxious Weed Program has become much more high-tech with online databases, GIS mapping and mobile data collection, and we have a crew of noxious weed specialists to roam the county hunting down noxious weeds like tansy ragwort. Unfortunately, this wily, persistent and deadly member of the dandelion family is already too well-established to stop easily and remains a widespread problem in our county. We are making progress every year, but tansy ragwort continues to torment pasture owners and vegetation management crews, and sadly, to poison horses, cattle and other animals. This is definitely a problem that will take a county-wide effort to solve.

Tansy ragwort came here by accident in the early 1900’s from Europe and Asia – as a contaminant in crop or alfalfa seed and in ballast water from ships. It quickly spread and established itself in the cool, moist climate of the Pacific Northwest, from British Columbia to northern California. It can survive east of the Cascades, but we definitely have the lion’s share on this side of the mountains.

Tansy ragwort is not difficult to identify once you get to know it. However, the first year plants are trickier. They are low-growing rosettes with ruffled-looking leaves and often reddish stems. They might remind you of a salad vegetable but they are definitely not for eating.

The second year plants produce flowers and are usually two to four feet (up to six feet at times) tall, with reddish, leafy stems topped with dense hordes of small, yellow daisy flowers. The flowers have orangey-yellow centers and yellow ray petals (usually 13 petals per bloom).

Tansy ragwort looks a lot like another plant also called tansy. Common tansy (Tanacetum vulgare) is also a non-native invasive weed, but it is not eaten by animals so we don’t worry about it quite as much. It’s also not regulated in King County so public agencies and property owners aren’t required to control it like they are tansy ragwort. The plants look similar overall and the flower color is the same, but they can be distinguished by the flower types and the leaf shapes. Common tansy flowers lack ray petals and just look like buttons, and common tansy leaves are sharply divided and resemble ferns. Seen side by side, you can tell them apart. But driving by quickly on the roadside, they are easy to confuse. 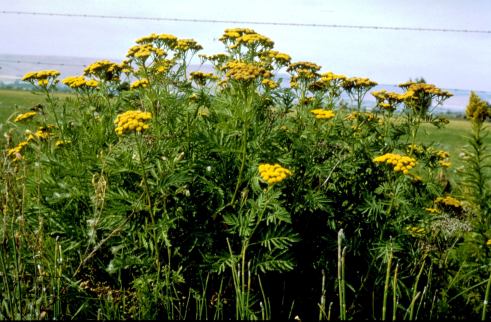 Common tansy can look a lot like tansy ragwort from distance.

Tansy ragwort is tricky to control because each plant can produce up to 200,000 seeds and these seeds can survive for up to 16 years. Most of the seeds fall within 30 feet of the parent plant, but some seeds travel far and wide caught on mowers or animals or moved by wind and water. Plants that are mowed will sprout from the crown and produce numerous shorter flowering stems. Flowering plants that are cut have enough energy to produce viable seeds.

Mowing flowering tansy ragwort can turn a small infestation into a field full of plants the following year. And wherever there are plants, seeds lurk, ready to replace any pulled plants. Control of established infestations will take many years; there’s just no way around that.

Between now and September, our program will inspect over 5,000 properties and roadside sites with tansy ragwort. Read about the Bumper crop of tansy ragwort we had last year. Since 2001, we have recorded over 7,700 infestations. Over 20% of those sites have been eradicated, but each year we find new infestations. Last year, the number of new sites we found was the same as the number of records we closed, so we are barely staying ahead!

In 2016, we recorded tansy ragwort infesting almost 145 acres of land in the county. As one population, that might not be too overwhelming. However, divided into 5,000 infestations this is an immense amount of work that will take many years to achieve. We can use everyone’s help in finding infestations and especially in getting the word out on the importance of thorough and persistent control of this noxious weed. 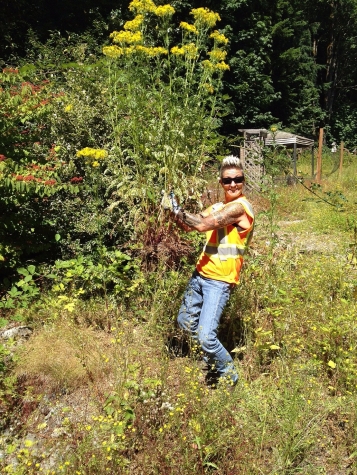