Home › Program News › A Day in the Life of a Weed Specialist: Saving Skykomish from Orange Hawkweed

A Day in the Life of a Weed Specialist: Saving Skykomish from Orange Hawkweed

Have you ever wondered how King County’s noxious weed specialists find and control invasive weeds in King County? Or have you wondered what they do to keep themselves, and all of us, safe while they do their job? If you have—or if you’d just like to see some nice orange hawkweed photos—read on.

On a gray morning in June, I drive with Noxious Weed Specialist Mattia Boscolo out Highway 2 to Skykomish to see him in action. We’re here to control orange hawkweed (Hieracium aurantiacum), an invasive dandelion-like European perennial that invades roadsides, meadows, and forest openings from low to high elevations, where it forms dense monocultures. The plant has hairy, unlobed, lance-shaped leaves that grow in a basal rosette. It flowers late-spring to mid-summer, first forming tight clusters of black, ball-shaped buds atop hairy, mostly leafless stems. The buds open to reveal orange flower heads followed by dandelion-like seed heads. All plant parts contain a milky juice. Orange hawkweed reproduces by seed, as well as via fuzzy white stolons that appear during flowering. 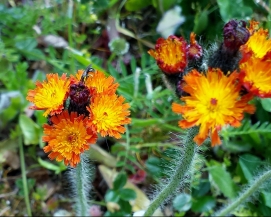 Mattia and other weed specialists have been battling orange hawkweed in the Skykomish area for over a decade. The weed is a big worry because it can invade alpine habitats. Infestations have already spread all the way to nearby Steven’s Pass. Orange hawkweed, along with the similar yellow hawkweed (Hieracium caespitosum), which has yellow flowers but otherwise looks the same), has invaded a number of other sensitive areas throughout the county. These include Tolt Reservoir east of Carnation, Snoqualmie Pass around Alpental and the Snoqualmie Ski area, and in the Cedar River Watershed. There are roadside hawkweed sites on I-90, U.S. Highway 2, and State Highways SR-410, SR-18, SR-169, SR-202, and SR-203. In unincorporated King County, there are hawkweed infestations on properties east of Redmond, east of Woodinville, near Covington and Kent, in the Edgewick area, and throughout the town of Baring, in addition to here in Skykomish. The hawkweeds also occur in many of the county’s cities, including Seattle, Burien, Renton, Woodinville, Bellevue, Black Diamond, Maple Valley, Redmond, North Bend, Enumclaw, and Federal Way.

According to Washington’s state noxious weed law, landowners are in charge of controlling any regulated noxious weeds on their properties, including orange hawkweed. But in 2005, after trying the regulatory approach for about eight years, the weed specialists could see that most of the property owners in the Skykomish area were not able to tackle the hawkweed effectively on their own, and it was only getting worse. Hawkweed is difficult to control and many of the property owners are not around during the growing season or lack the resources and knowledge to take on such a challenging weed. King County’s noxious weed program had to make a decision: either let the hawkweed go, or start to control it themselves. The risk to the environment was just too high to ignore so they chose the second option, which is why Mattia and I are here today.

We park the truck in a wooded neighborhood just past Skykomish’s downtown. Mattia pulls out his tablet and opens Collector for ArcGIS, an app that allows the weed specialists to view and collect data on finding and controlling noxious weeds while out in the field. Our program uses a wide variety of maps and layers for all kinds of projects, but today we’re only using it for orange hawkweed control. The map on Mattia’s tablet shows the county divided into landowner parcels. Some of the parcels contain small white circles with red borders. A circle means the property has an active regulated noxious weed infestation that hasn’t been surveyed this year. Other properties have “X”’s of various colors, which mean for example that the infestation is dormant, controlled, or closed.

A map of a Skykomish neighborhood showing active and controlled orange hawkweed sites.

Inside each circle or “X” is a symbol, which indicates the noxious weed species. The symbol for orange hawkweed is a small orange cross. In the screenshot below, you can see another symbol: the purple diamonds reveal policeman’s helmet infestations in downtown Skykomish. The black “X” over the higher diamond indicates that the infestation is closed, while the two lower diamond’s red circles show that the sites are active. 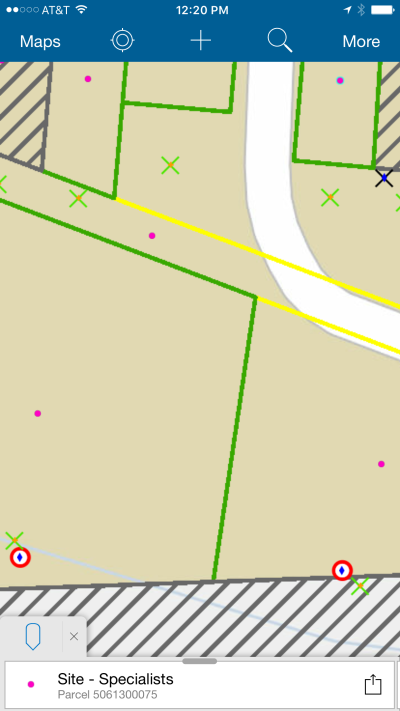 A screenshot showing active and controlled infestations for policeman’s helmet and orange hawkweed. A pink dot means the parcel has been treated in the past.

In the center of each infested parcel is a small pink dot. Clicking on the pink dot reveals lots of details about the history of the weed population on that parcel and any previous weed control treatments that were done (more on this below).

The parcels are also divided another way: most have a green border, but a few borders are yellow or pink, and some properties are filled with dark gray bars. These patterns hint at the long process Mattia has already been through: Before entering a property to control a noxious weed, he—and every other weed specialist—first contacts the landowner by phone, mail, or in person to ask for his or her permission. A weed specialist will only enter a property after the landowner has given the OK (except in rare circumstances where we’re unable to reach the property owner after repeated attempts using at least three different methods). A green parcel means the weed specialist has permission to enter the property. Yellow means no response, pink means earlier permission has expired, the gray bars mean the specialist hasn’t received permission to enter this year. Mattia has collaborated with most of these landowners for four years now, and almost all of the parcels here are green. 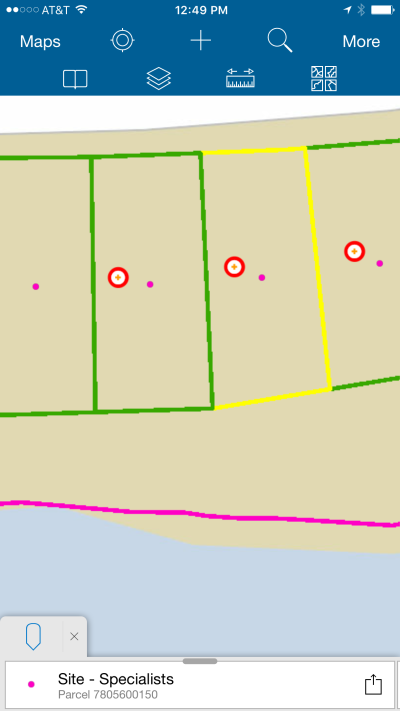 A close-up of where Mattia and I are working today. The green outlines indicate the parcels we’ll be entering to control the orange hawkweed infestations there (shown by the orange crosses inside red circles).

Having finished with his tablet, Mattia puts on a pair of light brown coveralls, gloves, and goggle-like glasses from the truck bed. He unscrews the top of his backpack sprayer: a plastic tub with shoulder straps attached to a long hose with a spray nozzle on the end. Opening three other containers of different sizes, he carefully measures and pours liquid from each into the backpack sprayer. After calibrating his spray rate, we’re ready to go.

When we reach our first orange hawkweed infestation, Mattia carefully sprays the flowering weeds while I stand upwind holding the tablet. With the help of a small device for measuring temperature and wind speed, I fill out a detailed form on Collector for ArcGIS (by clicking on the pink dot). The information makes sure our herbicide use is safe for all of the people, other animals, and plants in the area. The sections include: date; herbicide applicator name; application method; site type; species treated; start time, temperature, wind speed and direction; end time, temperature, wind speed and direction; herbicide(s) used, along with the concentrations of each; area treated; and volume of herbicide applied. We save this information on a permanent database that all of the weed specialists in our program can access.

Weed specialists fill out all of the above information each time they treat a site.

An example of the herbicide details weed specialists fill out for each treatment.

Mattia has been working hard, and most of this year’s orange hawkweed infestations are small patches that managed to escape last year’s control. Still, we complete the list in Collector for every single infestation on every property where we work. The information is a key part of making sure our work is safe for everyone and everything involved (except the targeted weed), as well as helping us to develop the most effective and efficient way of treating regulated noxious weeds. Our weed specialists have to know a lot not only about plants, but also about each control method and data collection procedure. They make sure to use the right technique for the right place and time—whether it’s digging, pulling, or spraying—and always listen to the property owner’s desires. 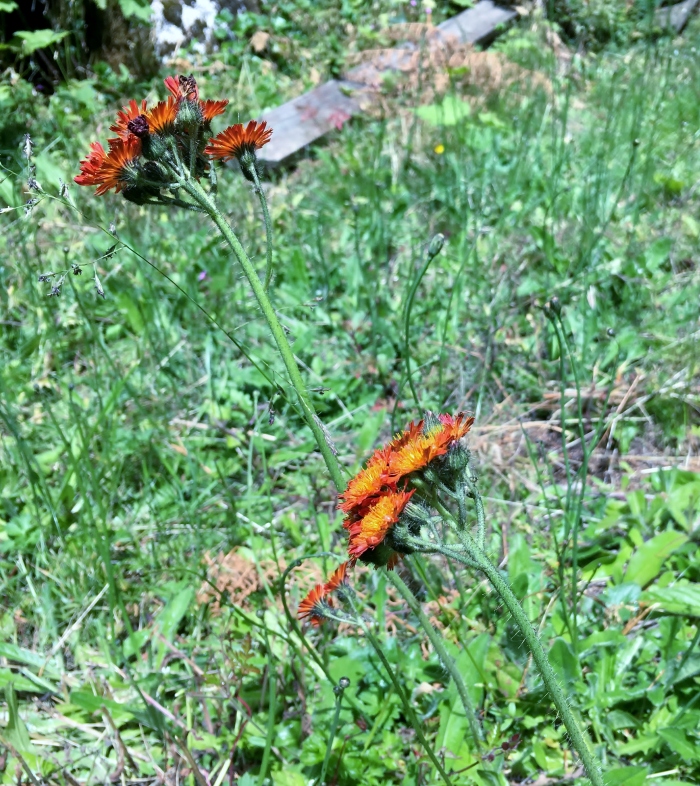 Want to learn more about the King County Noxious Weed Control Programs’ tools, methods, or anything else weed-related? Feel free to email us at noxious.weeds@kingcounty.gov or call 206-477-WEED (206-477-9333). Or learn more about this topic by visiting King County’s noxious weeds website.

Lesser celandine is up! This early spring ephemeral starts leafing out super early and will be flowering by March. It spreads by tiny tubers so make sure not to move soil around if it’s growing there. I know this plant doesn’t look alarming, but it can form pretty awe-inspiring solid patches that exclude other plants, only to die back in June or so, leaving bare ground for the rest of the year. Photo by Maria Winkler. #januaryweeds #lessercelandine #ficariaverna #ranunculusficaria #springephemeral
Does your tree have weird growths on the trunk like this? English ivy vines can be huge and covered with moss so you might overlook them when clearing the vines off your tree, like this person did. Did you know English ivy can live to be 100 years old and can add over 2000 pounds of weight to the tree? I admire its tenacity but our trees are happier without it so best to clear all the ivy vines off the trunk and free that tree! 😊 🌲 Photo by Maria Winkler #giantvines #englishivy #hederahelix #happytrees
Does this look odd to you too? Arundo donax or giant reed is definitely an odd plant to see hanging out in south Seattle. Sometimes planted in gardens around here but not usually escaping and growing like a weed. Arundo has created giant problems farther south in California and elsewhere in the southwest. Considered for use as a biofuel but also feared for its incredible growth and spread. This species is being monitored by the WA state noxious weed board so make sure to report it with EDDMAPSWEST if you spot it growing outside of cultivation in Washington state. Thanks to Ashlie Arthur for noticing this plant and snapping a photo. #plantoutofplace #arundodonax #giantreed #eddmaps
Is it summer already? Tansy ragwort flowering in January! Noxious weeds just don’t understand that we need an off-season! 😳😣 Weird weed spotting and photo from Tom Erler #weedsneverstop #winterweeds #tansyragwort #jacobaeavulgaris #seneciojacobaea