Even an experienced restoration crew following all the safety precautions can be at risk when working around poison-hemlock. By being aware and responding quickly, Nellie Hannah, Forterra’s WCC crew supervisor, and her team of AmeriCorps members are all fully recovered from a recent noxious weed removal project, but it’s scary how things might have gone if they had acted differently. The bottom line of the story is this: if you are pulling poison-hemlock, always listen to your body, take a break if things don’t feel right, and take your buddies with you!

Poison-hemlock grows in dense patches so make sure to take breaks for fresh air when removing it, and always wear gloves!

We first heard from Nellie when she called our program to ask about poison-hemlock symptoms. Ben Peterson, who answered the call, realized her concern was for people currently feeling sick so he gave her the number for Poison Control (1-800-222-1222). When Ben checked back later to make sure everyone was o.k., Nellie agreed to share her story so we could alert other people working around poison-hemlock. In her own words, here is what happened:

Thanks for checking in! My crew is thankfully fully recovered! It was definitely odd, as I’ve controlled poison hemlock (including that same site) for a few years and have never had a reaction like this.

We were hand pulling a dense patch of first year rosettes in Tacoma. It was located under a healthy stand of willows and dogwood. In terms of PPE we had lined rubber gloves, long sleeves, and raingear on.

We had spent 3 or 4 hours in that area (with a half hour break in the middle) when we realized that four of our six crew members had some degree of lightheadedness/dizziness and nausea. Two of us were also feeling a little confused.

We left the area, took vitals, and looked up the symptoms of hemlock poisoning before calling our sponsor and then Ben, who directed us to call the poison control center.

Poison control seems to have heard of a case like this where there was too much handpulling and told us about life-threat symptoms to look out for (tremors, vomiting, severe drowsiness, etc.) within the 1st hour after leaving the area.

Luckily we all felt better after a few hours of being away from the patch! It was pretty wet in there so we’re wondering if maybe the sap leached through our glove cuffs, or if we weren’t getting enough air circulation and some chemical compound was volatilizing. I know we’ve been cautioned to not mow through patches, especially in hot weather, for that reason.

Poison-hemlock is an acute nerve toxin so symptoms usually appear soon after exposure, which mainly occurs through ingesting the plant but can happen through other means like breathing in particles or even through the skin in some cases. People respond differently, but dizziness and nausea are good indicators that you should take a break.

According to the literature (which is somewhat scary I will admit!), the typical symptoms for people include: dilation of the pupils, dizziness, and trembling followed by slowing of the heartbeat, paralysis of the central nervous system, muscle paralysis, and death due to respiratory failure. For animals, symptoms include nervous trembling, salivation, lack of coordination, pupil dilation, rapid weak pulse, respiratory paralysis, coma, and sometimes death.

Fortunately, it is unusual for people to become ill when simply controlling poison-hemlock, and symptoms like Nellie’s crew experienced are temporary if you move to fresh air when you start to feel sick. As Nellie said, she had controlled poison-hemlock many times without any ill effects, even in the same location. This time they had bad luck probably due to the poor air circulation, but fortunately they did everything right. They paid attention to how they were feeling, got away from the plants and called Poison Control. Good work Nellie and crew!

Young poison-hemlock plants can be removed with a shovel. 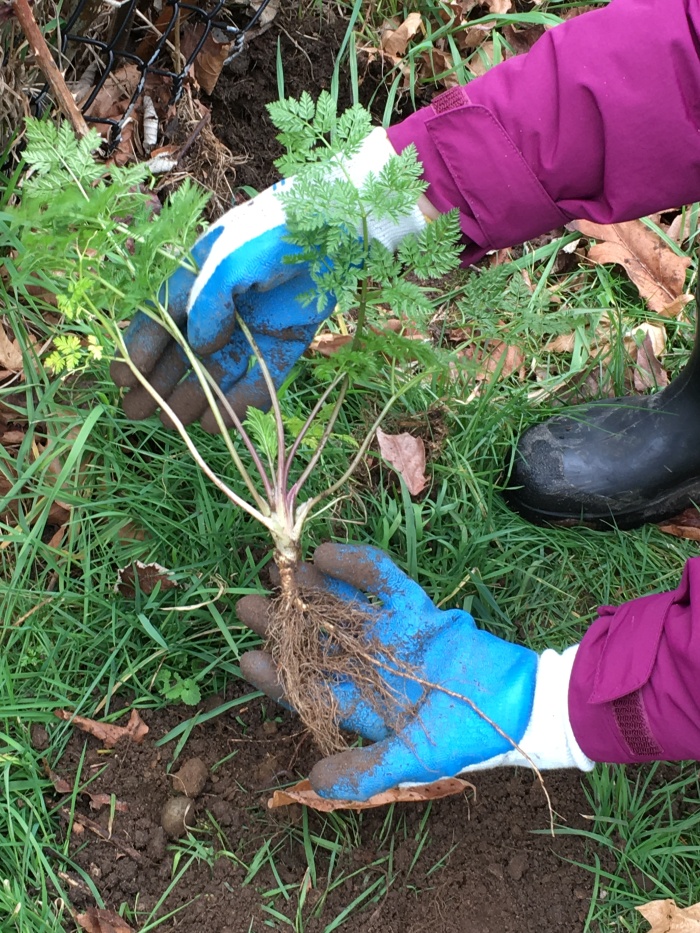 Poison-hemlock can be controlled by digging it up, just make sure to wear gloves. 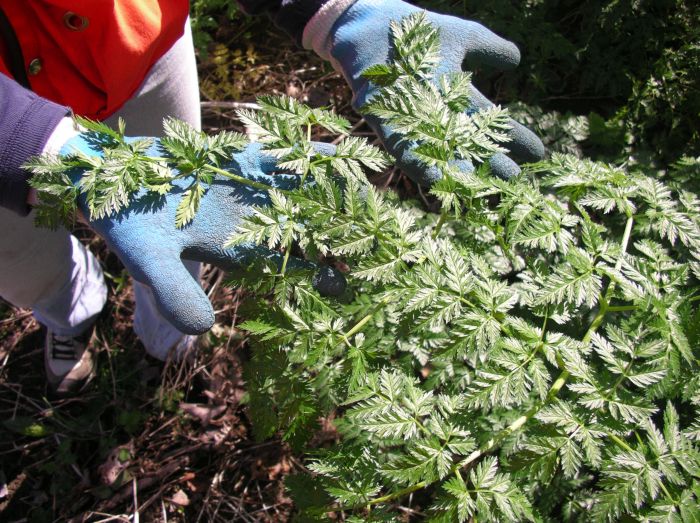 Poison-hemlock leaves are divided into lacy-looking segments with toothed edges.

Taller stems of poison-hemlock stems often have a whitish coating as well as reddish-purple spots. 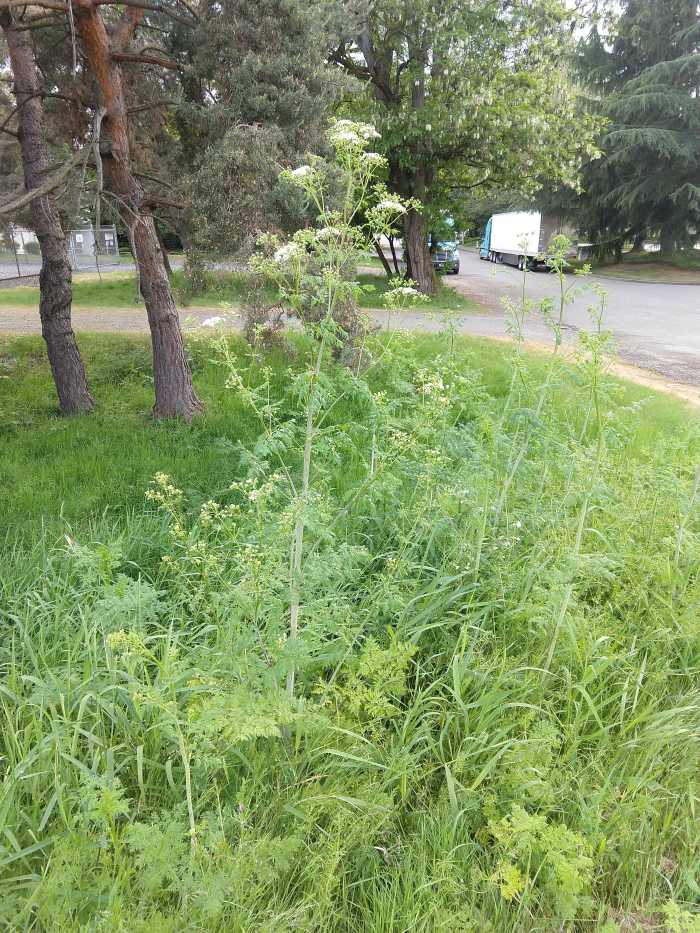 Poison-hemlock has small white flower clusters on the ends of branched stems and can grow 4 to 8 feet tall.

For more information about poison-hemlock:

Gorse is flowering! Remember to stop and smell the flowers, just don’t get too close, those spines are seriously sharp! Gorse is like Scots broom with thorns and a much nicer flower fragrance (cocoa butter perhaps?). Gorse also has the bonus badness of having a volatile oil that makes this plant a serious fire hazard! It’s easy to spot now before Scots broom starts flowering. Send us locations in King County and we’ll make sure it’s taken care of. We want to make sure it doesn’t go to seed because the seeds are just as long lived as broom seeds! Photos by Ashley Shattuck. #gorseofcourse #gorse #ulexeuropaeus #firehazard #spines #earlyflowers #notscotchbroom
We ❤️ families sharing time learning about native plants and noxious weeds! Enumclaw’s 8th Annual STEAM Expo brought hundreds of kids and parents together to learn about science, technology and art from all sorts of angles, including our very own noxious weeds booth hosted by Tricia MacLaren. Trish brought our interactive quiz, math exercises, coloring pages and the very popular 🍪 cookie method for calculating weed area! Thanks #Enumclaw for hosting this awesome event and to Tricia for the fabulous photos! #STEM #STEAM #scienceeducation #enumclawschooldistrict
Making room for native plants 🌱 and making the world 🌎 a little better one ivy pile at a time! There’s something so satisfying about pulling out English ivy to help a forest, and sharing that joy with the next generation is even better! This family volunteering moment on MLK Day with the Green Seattle Partnership brought to you by awesome dad and photo taker Ben Peterson. #familytime #mlkday #youngvolunteer #jacksonparkseattle #greenseattle #englishivy
Lesser celandine is up! This early spring ephemeral starts leafing out super early and will be flowering by March. It spreads by tiny tubers so make sure not to move soil around if it’s growing there. I know this plant doesn’t look alarming, but it can form pretty awe-inspiring solid patches that exclude other plants, only to die back in June or so, leaving bare ground for the rest of the year. Photo by Maria Winkler. #januaryweeds #lessercelandine #ficariaverna #ranunculusficaria #springephemeral